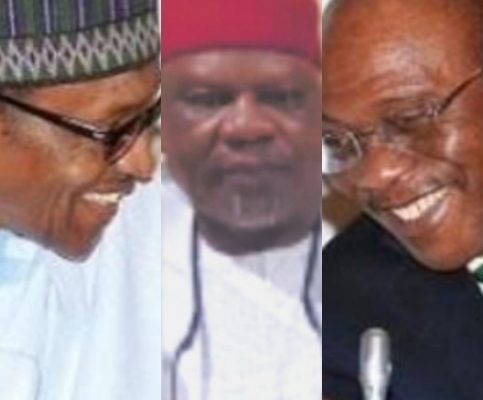 Conference Of Nigeria Political Parties (CNPP) has commended the Governor of the Central Bank of Nigeria (CBN), Mr Godwin Emefiele and the President Muhammadu Buhari administration on the successful unveiling of the redesigned naira notes, saying the redesign will remain a legacy achievement for the administration.

This was contained in a statement issued on Thursday by the CNPP Secretary General, Chief Willy Ezugwu.

According to the umbrella body of all registered political parties and political associations in Nigeria, “President Buhari administration has, by this singular action, demonstrated a strong will not only to manage Nigeria’s ailing economy but also towards a free, fair and credible general elections in 2023.

“With the launch of the new Naira notes, if followed by strict implementation of the outlined monetary strategies for a full cashless economy, Nigerian democracy will be better for it.

“President Buhari rightly noted the ‘urgent need to take control of the volume of currency in circulation and to address the hoarding of Naira banknotes outside the banking system, the shortage of clean and fit banknotes in circulation, and the increase in counterfeiting of high-denomination Naira banknotes’.

“Mr. President rightly explained that it is on this basis that he gave his approval for the redesign of the ₦‎200, ₦‎500 and ₦‎1000 banknotes.

“For the CNPP, there is no better time to take control of the money in circulation than now, especially with the forthcoming 2023 general elections and the experience Nigeria has had in recent years in form of voter inducements.

“Vote buying is a menace all citizens must vehemently stand against in unism irrespective of political affiliation as we can only play politics where there is a level playing field.

“No democracy can survive if political activities are controlled by moneybags and corrupt politicians who market themselves based on their financial might rather than showcasing their track records of good governance and commitment to the ongoing war against corruption.

“The Governor of CBN, Godwin Emefiele, has immensely assisted President Buhari a great deal to demonstrate glaring commitment to the fight against electoral corruption through the proposed controlled distribution of the new notes, which will in turn control inflation, make monetary policies more effective and ensure financial inclusion.

“The best fight against corruption is to prevent it in the first place and this is one of the the gains of the redesigned high-denominations banknotes.

“For Nigeria to maximize benefits of the redesigned naira notes, including enhanced security, greater durability, attractiveness and promotion of rich cultural heritage as well as tackling vote-buying, the CBN and anti-corruption agencies must at all cost discourage over-the-counter cash withdrawals in large sums”, the CNPP said.