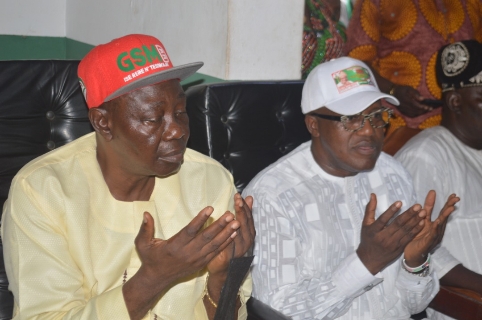 Contents show
1 …Promises Robust Feedback Mechanism
2 …As Adeniran Pledges All Round Development in Oyo South Senatorial District
2.1 Kindly Share This Story With Friends via:
2.2 Like this:

…As Adeniran Pledges All Round Development in Oyo South Senatorial District

Adeniran made his intention known on Saturday, at the Peoples Democratic Party Secretariat, Molete, Ibadan where scores of supporters and party executives received him.

Earlier, Dr. Adeniran had met with Party leaders, local government executives and ward Chairmen from the district, where he promised to ensure good representation.

He said, “I’m here at the state party secretariat of Peoples Democratic Party Oyo State PDP to officially inform the party and to officially declare my interest to contest for the position of senator in the Oyo South senatorial district and to also make official declaration to the world that I’m contesting this coming election”.

“Bearing in mind that the party has already released the guidelines towards the process of nominating candidate for the 2023 general elections and I find it auspicious to come out in the open to tell the entire people of Oyo South senatorial district that I’m interested in contesting for the position of Senator in that senatorial district.

“Earlier before now I have made consultations in all the nine local government areas in the Oyo South senatorial district”, he said.

A statement by the Executive Chairman’s Media team further indicated that Adeniran has extended his consultations to all PDP stakeholders in his senatorial district.

Dr. Adeniran, speaking further on his ambition, told journalists that he is now convinced to contest the Oyo South Senatorial seat on the platform of the People’s Democratic Party (PDP).

“I am finally convinced that God has confirmed to me to contest for the election. Therefore, I am making this humble request that you agree with the vision”, he said.

He promised to put in place a robust feedback mechanism, within Ibadan and Ibarapa zones, adding that he has intentions to consolidate on Governor Seyi Makinde’s road map to accelerated development, as a Senator of the Federal republic of Nigeria.

“The reason why I’m coming out to contest is to avail the people of the senatorial district of my service to provide quality representation and to let them see an established feedback mechanism which suppose to be between the constituents and their legislator and to also contribute to the growth of infrastructure in the senatorial district so as to assist what the Oyo State Government is already doing in area of education, health and other infrastructure facilities”.

“While I ensure physical development in our Senatorial district, I will also safeguard the interest of constituents and initiate a regular feedback mechanism”, Dr. Adeniran said.

While fielding questions on whether he has consulted the state Governor, Engr. Seyi Makinde about his ambition, Dr. Nureni Adeniran said, “everybody has seen that the governor is transforming the state from poverty to prosperity and I’m serving under him.

“He’s my principal and my leader, he’s the leader of the party. It will be a great disservice and out of point for me not to have informed him of my interest and as a leader and a father of all.

“He said, ‘you’re free like any other person to aspire, the people, the party members will decide at appropriate time without any problem or any rancour'”, he recalled.

Dr. Nureni Aderemi Adeniran is a long-term grassroots politician, whose experience spans over two decades in the political terrain of Oyo State and Nigeria.

Dr. Adeniran was formerly the Executive Chairman of Ibadan South West Local Government, a position he held from 1999-2002 and was known for his giant strides as the Chairman.

He was a Member, LAUTECH Teaching Hospital Management Board. A two-time Commissioner, who supervised the Ministry of Industry, Applied Science and Technology between June 2009-Nov 2010.

Adeniran also supervised the Ministry of Education, Science and Technology between 2010-2011 under the former government of Otunba Christopher Alao Akala.