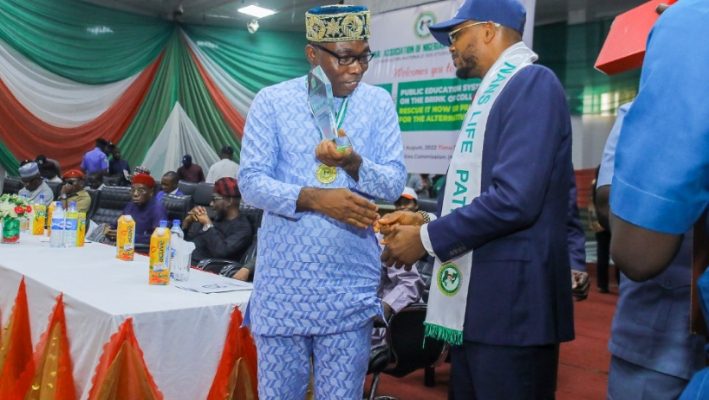 On Thursday, 25th August, 2022, Prince Adewole Adebayo, Presidential flag bearer of the Social Democratic Party (SDP) was bestowed an award in recognition of his leadership as the most outstanding politician of the year 2022 by the National Association of Nigerian Students (NANS) in Abuja.

The award was delivered on the sidelines of the 40th anniversary of NANS held at the National Univeristies Commission (NUC) Hall in Abuja.

The focal point of dioscussions was ‘Public Education System on the brink of collapse: Rescue it now or prepare for the alternative’ and emboided the frustrations and aspirations of Nigerian students.

NANS had recently been accused of non-chalarnce towards the resolution of the rift between the federal government and the Academic Staff Union of Univeristies (ASUU) that resulted in a prolonged strike.

The leadership of the student body, through the NANS President, Sunday Ashefon, expressed that the education system in Nigeria was on the brink of total collapse and that NANS had received more than it could handle from the unfolding events.

“Perhaps the tertiary sector in Nigeria is faced with one of the strongest tests in our history in the last few years. We have witnesses the total collapse of the sector as a result of the incessant strike.

This challenge alone is bigger than what any NAN administration could resolve,” he remarked.

NANS Life Patron and politician, Hon. Shina Abiola Peller on behalf of the student body presented the award to Price Adebayo, eulogising the politician who showed up recently on the political scene but has gained noteriety for pushing critical thinking and resolve in any conversation about today’s polity.

In accepting this award, Prince Adebayo was in company of the former Minister for Youth and Sports, Hon. Solomon Dalung, Senator Ugochukwu Uba, Pastor Ade Alabi, and Chief Godwin Osigbeme.

Prince Adebayo in his good will message to NANS, congratulated the student body for surviving the socio-economic brutalities of the 80s, 90s and 2000s.

He said that NANS is a serious recruitment body that will produce all kinds of leadership, and thus, NANS must be taken seriously when discussing issues of national interest in Nigeria.

He further charged that for NANS to be taken seriously, NANS must take itself seriously.

“NANS must maintain a coordinated position on every national issue, else this recruitment body will incur three problems that cannot be cured.

“The youth must go back to the days of involvement with both foreign and national affairs,” he said.

The 3 problems he cautioned about were centred on NANS not having a common position on national issues, saying that this projects the decisions of the student body as contradictory.

“The Nigerian youth who don’t have a NANS-like organization to protect their interests will further suffer as a result of unarticulated interest” while “the perception that a government is full of people thinking about the welfare of youths being false – because today’s leaders are not thinking about welfare at all.”

He founded the blossoming media enterprise, KAFTAN TV, which employs and empowers the Nigerian youth demographic, and has established his law practice in Nigeria and overseas where he is a known employer of labour.

He therefore advised that the entire student body should be more reflective, adding that this is not the time for any form of celebration or recognition to anybody.

He pinpointed that a leadership that cannot open a university has no member capable of receiving any award from students.

“If we are giving politicians awards now that the economy is down, what are we going to give them when universities have computers, when they design curriculums correctly, and build universities where everyone has a decent hostel?”

In his parting remarks Prince Adebayo thanked the student body for the gesture, and said that NANS should go back to its radical days.

“They must not take excuses because Nigeria needs an angry NANS that ask questions, that challenges authority because nobody else is doing it. If you don’t do it, the country is gone”, Prince Adebayo insisted.

The presidential candidate then implored NANS to be more international because, although problems abound, the solutions are also within reach.