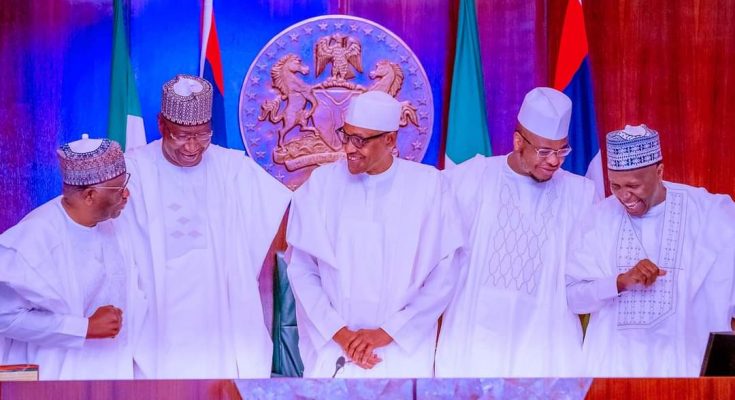 FG Inaugurates 3 Governors, Others in Presidential Council on Digital Economy and E-government

Recall that President Buhari had recently approved the appointment of Governor Muhammadu Inuwa Yahaya as a member of the Presidential Council on Digital Economy and E-government.

The notice of his appointment was contained in a letter signed by the Minister of Communication and Digital Economy, Prof. Isa Ali Ibrahim Pantami which described Gombe State as critical to the success of Nigeria’s Digital Economy Agenda.

It said that the constitution of the Presidential Council was in an effort to implement the National Digital Economy Policy (NDEPS) and the Nigerian E-government Master Plan (NEGMP).

Below is the State House Press Statement on the inauguration ceremony as released by Presidential Spokesman, Femi Adesina.

President Muhammadu Buhari Friday in Abuja inaugurated the Presidential Council on Digital Economy and E-government, promising that his administration will continue to take advantage of digital technologies to transform every sector of the economy.

The President directed the Minister of Communications and Digital Economy, Prof Isa Ali Ibrahim (Pantami) to chair the Council on his behalf and give regular updates.

He tasked members of the Council to work towards further strengthening the capacity of government to develop, adopt and deploy digital technologies to make government more efficient and transparent, thereby improving Nigeria’s global standing in the ease of doing business index.

The President noted that the Council, whose members have been arrived at after a painstaking and thorough process, would provide the oversight needed to bring about a veritable structure for accelerating achievements in digital economy and in the implementation of e-government in the country.

He enjoined every member of the Council to consider the task as a national assignment and justify the trust reposed in their ability to support and significantly enhance the digital transformation of Nigeria.

‘‘I launched the National Digital Economy Policy and Strategy (NDEPS) on the 28th of November, 2019 and expanded the mandate of the then Ministry of Communications to include Digital Economy.

‘‘The implementation of that policy and mandate has enabled us to achieve significant progress and record a number of unprecedented achievements.

‘‘The impact of the COVID-19 pandemic on the global economy showed that the steps we took in developing and implementing NDEPS were indeed timely.

‘‘For example, the Information and Communications Technology sector was the fastest growing sector in both the fourth quarter of 2020 and the entire year 2020, based on the Report by the National Bureau of Statistics.

‘‘The sector’s 14.70% double-digit growth rate was instrumental in supporting our country to exit the recession triggered by the COVID-19 pandemic, far earlier than predicted by experts.

‘‘The significant contribution of 17.92% by the ICT sector to our GDP in the second quarter of 2021 is another example of the important impact of the digital economy on the overall economy.

‘‘In the same vein, the growth of our digital economy sector enabled us to cope with the effect of the lock-down as both activities of the government and private sector, as well as educational activities, were able to move to online platforms,’’ he said.

Furthermore, President Buhari expressed delight that the approval of the National Policy on Virtual Engagements for Federal Public Institutions has helped to formalise government online meetings.

He noted that statutory meetings like the Federal Executive Council (FEC), Council of State, and other meetings can now effectively and legally take place online.

He added that Nigeria’s progress in e-governance has been noted by the international community, eliciting recognition from international stakeholders including the appointment of the Minister of Communications and Digital Economy as the Chairman of the 2022 Forum of the highly regarded World Summit of the Information Society.

While congratulating the Minister, the President acknowledged that the Ministry has partnered with the Korea International Cooperation Agency to develop a National e-government Master Plan, approved by FEC in August 2019.

The President listed benefits from the partnership including; “the training of over 1,400 Nigerian public servants in both Nigeria and South Korea on e-governance; the launching of an E-Government Training Centre handed over to the Federal Government in November 2019 and the signing off of Phase II of the e-government Project – “Project for Building Foundations Towards Digital Governance in Nigeria (2020-2026).’’

In his remarks, Prof. Pantami noted that NDEPS launched in 2019, made provision for the establishment of the Presidential Council to coordinate the development of an indigenous digital economy.

Describing the implementation of NDEPS for a digital Nigeria as very successful, the Minister said in the last two years, the sector has provided ICT intervention to no fewer than 1,667 institutions at the Federal and sub-national levels.

He added that the recent auctioning of spectrums by the Ministry generated over 400 per cent revenue to the Federal Government coffers while two virtual institutions established by government have trained some 500,000 Nigerian on digital and emerging technologies.

Like Loading...
Previous PostBREAKING: Tragedy as Petrol Tanker Goes in Flame in Lokoja Next PostNDE Kicks-Off Apprenticeship Scheme For 990 Trainees In Oyo