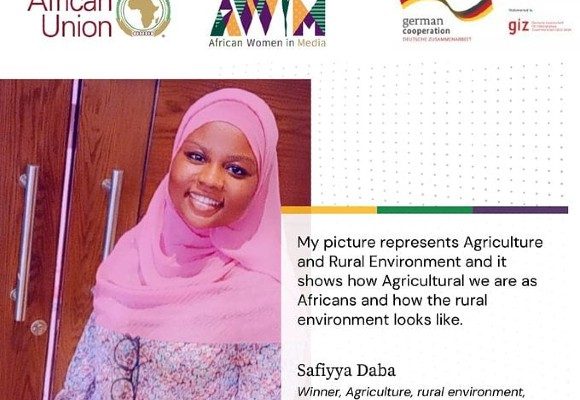 A Kano based Nigerian writer and photographer, Safiyya Muhammad Daba, has been announced as winner of the Agenda 2063 women photojournalism award organised by African Women In Media (AWiM) in collaboration with African Union and German Agency for International Cooperation (GIZ).

This announcement was made by African Women in Media (AWiM) during Agenda 2063 Women’s Photojournalism Awards virtual award ceremony held on July 28, 2021.

According to the organisers, the award was organised to “recognise and celebrate outstanding female photojournalists whose submission of African images will be defined by categories defined by the Goals and Aspirations of Agenda 2063.” All of the winners in each category will get the sum of $2000 each.

The amateur photographer won the award for her photo under agriculture and rural environment, land rights and skills development category.

The hijab wearing Muslimah took her time to travel around Kano state documenting the beauty of Africa through photography. She revealed that the award-winning photo was taken during her tour to Takai in 2019 after having intensive training by Equal Access International and National Geographic Photographers.

Nigeria’s Daba is the only Nigerian who won the award alongside three winners from Africa: Vanessa Chebet from Kenya; Fardosa Hussein from Somalia; and Arlette Bashizi from DRC under the various categories of the competition.

Similarly, while speaking with Abuja Business Reports on the award, she expressed her excitement for winning the award.

“When I got the email from them, telling me to get prepared and set up my Microsoft Teams app, that It’ll be required to speak should I win the competition in the category I entered to compete in, I was so happy and I couldn’t believe my eyes and ears on the day of the award ceremony. It is really a great pleasure competing alongside professional photographers and photojournalists, and i am really humbled”

Commenting on how the award has impacted her journalism career, she stated that “the award is really a great achievement for me. It has inspired me to take pictures, especially those that will bring positive change to my society. Also want to encourage more women from the north to break this barrier of not having women in the so called ‘men’s profession'”

Like Loading...
Previous PostN287bn Profit: We Commend Your Efforts But Doubt Your Figures – CNPP To NNPC GMD, Kyari Next PostNNPC ₦287bn Profit: Kyari Explains Facts Behind the Figures