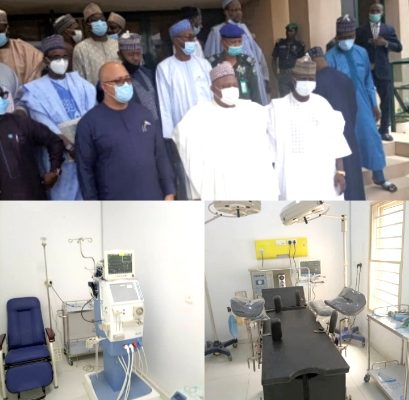 Katsina State Government has said enormous resources have been mobilised in the fight against the COVID-19 pandemic in the state.

Governor Aminu Bello masari spoke this during the official handing over and commissioning of the Nigerian Center for Disease Control (NCDC) Isolation Center at the Federal Medical Center, Katsina.

He said that Drugs were also procured for managing COVID-19 cases.

The Governor further explained that the state government collaborated with the federal medical center in utilizing the FMC isolation center for the management of severe COVID-19 cases.

He said that a vigorous sensitization campaign was conducted to ensure all the people of the state were fully informed on the dangers of the disease and compliance to non – pharmaceutical ways of preventing the spread of the virus.

Masari said Drugs and other essential commodities like PPEs, infrared thermometers, and sensitizers were procured for use in the outbreak response.

He said that the Director General (DG) of Nigerian Center for Disease Control (NCDC) had been supportive to the state in ensuring that approval was granted to a private laboratory in katsina that meet up with the stipulated requirements on the establishment of a molecular laboratory.

According to a statement signed by the Chief press secretary to the state Deputy Governor, Ibrahim Musa Kallah, the Governor noted that the state will always be grateful to NCDC DG as that onerous task brought succour and ensured that results and samples collected were processed within 24 hours.