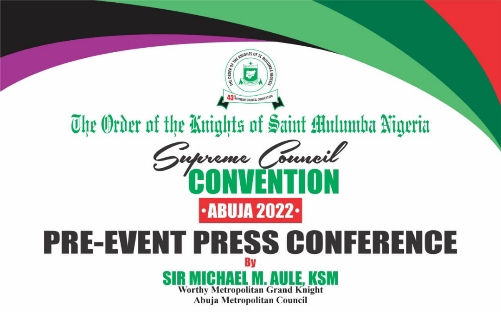 In line with it’s determination to strengthen the bond of it’s fraternal unity and love, the Catholic Knights of St Mulumba has highlighted the Roles of Nigerian Churches for spiritual growth and overall national development ahead of its scheduled Convention next week.

Contents show
1 Membership And Strength
2 The Structure/Organs of Government
3 The Supreme Council
4 Degrees of the Order
5 Charity
5.1 Kindly Share This Story With Friends via:
5.2 Like this:

The National Convention which seeks to use the platform to stimulate conversation and consciousness of the role of the Church in the advocacy and the Promotion of Peace, Equity, Justice and Development in the Democratic Transition in Nigeria has also made It to be the theme of the discussion at the scheduled National Convention of the (KSM) in Abuja.

According to the organisers, the Conference will also discuss the Catholic Church in Nigeria and the growing challenges of supporting Christians and victims of several Religious Conflicts in Turbulent Regions of the Country.

This was made known in a statement by Sir Michael M. Aule KSM, the Metropolitan Grand Knight of Abuja Metropolitan Council.

He explained that the Order counts on its members, men and women who because of their education, social position and material resources can fight a good cause with success for the greater glory of God, the Church and the progress of our Country using their (3 Ts) Time, Talent and Treasures.

“The Supreme Convention of KSM Nigeria is a platform for the promotion of the values of the Order through open discussions on vital issues such as the Christian faith, religious harmony, good governance, sustainable development, peace, unity, and equity as they affect our beloved Country,” he noted

According to the statement, expected at the ceremony are the Papal Nuncio to Nigeria, the Archbishop of the Catholic Archdiocese of Abuja, all the Bishops in Abuja Ecclesiastical Province, the Bishop Chairman of Laity, the Secretary to the Government of the Federation, the Minister FCT, the Governors of Benue, Nasarawa, Plateau and other States as well as the Deputy Governors of Kogi and Nasarawa States.

The Convention will also be attended by over 350 delegates from the Order which will include the Supreme Executive Board members, designated Metro Officers and the Grand Knights of all the Sub councils in the country.

His Eminence, John Cardinal Onaiyekan will deliver a paper on the convention’s main theme, while the second presentation will be done by the Bishop of Maiduguri Diocese, His Lordship, Most Revd. Oliver Dashe Doeme.

The major aims of its establishment were to counteract the harm done to the Catholic Church by many secret societies such as the Free Manson and Ogboni cults and to arrest the influx of the enlightened Christian members to those harmful groups that were totally opposed to the Catholic faith and morals. Another aim was to bring the Catholics together in fraternal association for the good and progress of the Church, for the welfare of the country and for the well-being of Nigerians generally and its members in particular.

The KSM is the national Order of Knighthood in the Catholic Church in Nigeria founded by Rev, Fr. Abraham Anselm Isidahome Ojefua on the approval of the Catholic Bishops Conference of Nigeria on 14th June 1953.

It started with the initial membership of 23 comprising 3 Priests and 20 lay faithful now has over 23,000 members and 280 Sub Councils across the country.

Only Practicing Catholic Men and their wives are admitted. Membership spans all cadres of Professionals such as Government Administrative Officers, Accountants, Teachers, Lawyers, Businessmen, Professors, Engineers, Bankers, Doctors, and other Professionals etc in all strata of the Economy. All the Bishops in Nigeria by the virtue of their positions are automatic members of the Order.

Priests are also admitted on the approval of their Local Ordinaries.

The Structure of the Order consists of the Supreme Council, the Metropolitan Councils and the Subordinate Councils in the decreasing order of Authority.

The Head of the Order is the Supreme Knight. There are nine Metropolitan Councils corresponding to the nine Ecclesiastical Provinces of Nigeria, each headed by a Metropolitan Grand Knight.

The Supreme Executive Board (SEB) is the Executive Arm of the Supreme Council and is made up of all the Supreme Officers, Past Supreme Knights, two Noble Officers and Metropolitan Grand Knights.

Degrees of the Order

There are membership grades in the Order to show and give credence to seniority and Knowledge. The Order has four degrees namely First, Second, Third and Fourth Degrees in the ascending order of seniority.

Establishment of the Order Outside Nigeria

The Order has established a similar Catholic Knighthood in Uganda in 2004 known as Order of Knights of St. Matia Mulumba Uganda and in April 2008 inaugurated a Sub Council in Mamfe Cameroon.

The Order performs various charitable works to members of the public, both Christians and Non-Christians alike.

On a regular basis, Members both individually and collectively visits Hospitals, the needy, Correctional Centers and render diverse support to Religious Houses such as the building of Churches one among whom you shall see at Veritas University during the course of this upcoming National Convention, Religious projects, donations to Orphans, disabled and old Peoples’ homes, Training the Clergy, donations to Convents, and Monasteries and giving generously towards development of various places throughout the country.

The Order counts on its members, Men and Women who because of their education, social position and material resources can fight a good cause with success for the greater glory of God, the Church and the progress of our Country using their (3 Ts) Time, Talent and Treasures.