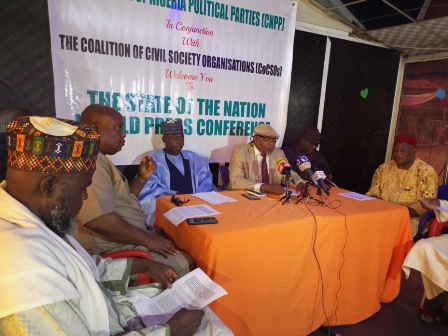 Why You Must Sack Emefiele Now – CNPP, CNCSOS To Buhari

The Conference Of Nigeria Political Parties (CNPP) and a coalition of civil society groups under the umbrella body, Coalition Of National Civil Society Organisations (CNCSOS) have called on President Muhammadu Buhari to immediately relieve the Governor of Central Bank of Nigeria (CBN), Mr. Godwin Emefiele of his duties, saying he is unfit to remain in office having joined politics.

The CNPP and the CNCSOS said Mr. Emefiele has been a card carrying member of the ruling All Progressives Congress (APC) since 2019, insisting that his presidential ambition was premeditated.

The groups in their briefing, read by the Secretary General of CNPP, Chief Willy Ezugwu, said “we maintain our position that Mr. Godwin Emefiele must resign before seeking nomination as a presidential aspirant and before participating in APC presidential primaries and that in line with the CBN Act, Mr. Emefiele must show evidence that he has submitted his letter of resignation to President Muhammadu Buhari three months before the date of purchase of his nomination forms which are in his name.

“Whether purchased by proxy or by himself, what is important is that the forms were purchased with his name on the receipt as a valid evidence of payment of the N100 million expression of interest and nomination forms.

“We call on President Muhammadu Buhari to immediately sack Mr. Godwin Emefiele as the CBN Governor over gross misconduct in line with the Public Service Rules and CBN Act for registering as a member of APC since 2019.

“We demand that President Buhari act swiftly to restore the confidence of international investors in Nigeria’s economy as Godwin Emefiele is clearly a politician and former banker”, they said at a press conference in Abuja on Tuesday.

Reacting to a court case instituted by Mr. Emefiele, they said, “We condemn in totality the legal action instituted by Godwin Emefiele, asking the Federal High Court sitting in Abuja restrain the Independent National Electoral Commission (INEC) and the Attorney General of the Federation (AGF) from disqualifying him from contesting the 2023 presidential election.

“This has clearly painted Mr. Emefiele as one that cannot be trusted, having denied having interest in the 2023 presidential election and distancing himself from the APC presidential nomination forms purchased in his name, making him unfit to remain in office as CBN Governor.

“His stay in office, even if he fails to contest the presidential election will certainly cast doubts on Nigeria’s electoral outcomes in view of the sensitive electoral materials that are traditionally kept in custody of CBN which now has a partisan Governor.

“We warn that Nigeria’s economic woes will worsen if Mr. Godwin Emefiele continues to formulate and supervise the execution of Nigeria’s monetary policies as an APC member against international best practices and standards which forbids a CBN Governor from being a member of a political party.

“If Mr. President allows this impunity to continue, we then call on all judges, justices and judicial officers to pick up their nomination forms from political parties of their choice. If this is absurd and contrary to the principle of neutrality, harmony, and integrity, then the Mr. Emefiele must resign now.

“The situation is even worse when you look at the desperation of Mr. Godwin Emefiele, who threw caution to the winds by approaching the court to restrain INEC and the Attorney General of the Federation from disqualifying him from contesting the 2023 presidential election even when he is denying ever having interest to contest and have not declared.

“It then implies that Mr. Godwin Emefiele, who is in charge of the Nigeria Printing and Minting Company can possibly manipulate his way to the extent of printing naira notes for the purpose of buying votes from both party delegates and the Nigerian electorates during the presidential election in 2023.

“However anybody looks at it, in view of the actions, inactions, and denials by Mr. Emefiele, it is illegal, immoral and a big threat to the Nigerian economy to have Godwin Emefiele to remain as the CBN governor even for a day longer from today.

“We hereby hail the Nigerian judiciary for once again standing on the part of neutrality, fairness and justice by refusing to grant the ill-fated restraining ex-parte application filed by the Mr. Godwin Emefiele.

“We note that if the restraining order was granted, it would have done worse damage to the Nigerian economy, the psyche of Nigerian people and that of the international investors than what the needless controversy sparked by Emefiele’s presidential ambition has already done as Nigeria has continued to witness free fall of the naira against other currencies.

“The CNPP and allied civil society organisations hereby call on all security agencies, including the EFCC and the ICPC to investigate the CBN governor’s sources of funding for the alleged branded vehicles in the colour of APC and with him name and image of Emefiele on them. Such vehicles must be located and impounded pending the conclusion of the investigation.

“In the same vein, 2021 all the groups that claimed to have purchased nomination forms for the CBN Governor should be investigate to restore the confidence of Nigerians in the Buhari administration as a government up against corruption and official misconduct.

“We equally demand investigation into whether electoral materials kept at the CBN by INEC since 2019 when Emefiele joined partisan politics were in anyway compromised.

“We commend INEC for disclosing that the commission would take action concerning sensitive materials which were being kept in the custody of CBN during elections in view of the full blown partisanship of the CBN governor.

“With this move by INEC, we believe that the incumbent INEC Chairman can be trusted to conduct a free, fair credible elections in 2023”, the groups said.