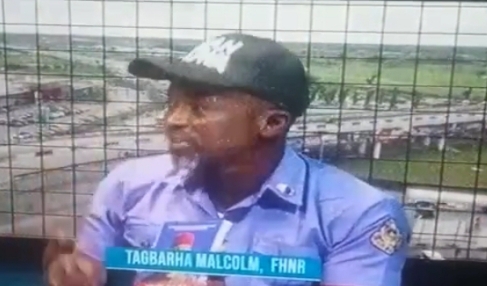 PDP Mega Rally: The Only Thing Left of APC in Delta State is the Name APC, Says Tagbarha Malcolm, Author of the Book, “The Man Okowa”

Multi-award winning writer and author of the most talked about book today in Delta State, “The Man Okowa,” Tagbarha Malcolm, Saturday, 29th of January, 2022, was amongst special guests of Morning Watch, a popular live breakfast programme of the Delta Rainbow Television, DRTv Warri.

The segment of the programme which was centered on the recently concluded PDP Mega Rally, also featured Hon. Kingsley Okpako, a Senior Special Assistant to Delta State Governor on Community Development, who posited that it was the remarkable achievements of Governor Ifeanyi A. Okowa, that led to the carnival witnessed during the just concluded PDP Mega Rally.

The pioneer Chief Press Secretary to Sapele LGA Council and State Publicity Secretary, Coalition for Media Politics and Governance, (CMPG), spoke very passionately while enumerating the outstanding achievements of His Excellency, Sen. (Dr.) Arthur Ifeanyi Okowa as encapsulated in his book entitled, “The Man Okowa: His Leadership Style and Achievements”.

He also stated that the gale of defections was necessitated by the sterling performances of the SMART working Governor of Delta State, despite harsh economic challenges Nigerians are currently grappling with, as a result of the failed APC led government at the Federal level. Adding that since the first PDP Mega Rally held in Sapele on the 23rd of May, 2017, the Olorogun (Barr.) Kingsley Esiso led Peoples Democratic Party, PDP, has continued to harvest prominent politicians from the opposition parties, especially the APC. Adding that the political carnival witnessed by Deltans at the Cenotaph in the State Capital last Saturday, 22nd of January, 2022, was a clear manifestation of the total annihilation of the APC in Delta State. “The only thing left of the APC today in Delta State as of today, is the name – APC” He stated.

The USAID/International Republican Institute, (IRI), Campaign Trainer, further stated that before the incumbent governor assumed office, the previous administrations of Chief James Onanefe Ibori and Gov Emmanuel Ewetan Uduaghan, respectively wrote their names in gold through the outstanding policies and programmes they executed that laid the foundation on which governor Okowa is currently building upon. “There is no edifice anywhere in Nigeria today like the magnificent multi-billion naira State Secretariat Complex built in Asaba to effectively streamline the activities of our state’s civil service under one sustainable structure by Governor Okowa.

When asked about the issues surrounding the zoning of the governor, Mr Tagbarha Malcolm, fellow of the Institute of Human and Natural Resources, corroborated the governor’s position that, “There will be free and fair primary election that will eventually produce his successor”.

Like Loading...
Previous PostFOI Desk Officers of Public Institutions Meet on Establishment of Online Platform to Share Information on FOI Implementation Next PostFirst SA Diaspora To Gov. Uzodinma At #AFCON As Special Guest