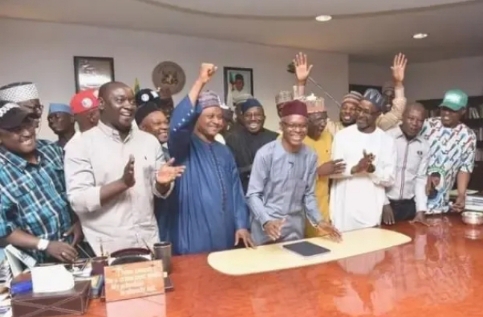 As the circle of endorsement of successors continues ahead of Nigeria’s 2023 general elections, Senator Uba Sani, the Senator representing Kaduna Central has been anointed by Governor Nasir El-Rufai for Kaduna State governorship seat.

The governor consequently directed other aspirants on the platform of the ruling All Progressives Congress (APC) to support him.

The governor, it was gathered, has also directed a former Commissioner in the State, Muhammad Sani Abdullahi Dattijo, who had aspired to contest in the governorship primary of the APC to step down for Senator Uba Sani.

The endorsement by Governor Nasir El-Rufai was preceeded by resounding ovation in celebration of the action by friends and political associates of Senator Uba Sani.

According to reports, El-Rufai had at a meeting on Wednesday, compelled his former Chief of Staff and two-times former Commissioner of Budget and Planning, Muhammed Sani Abdullahi, popularly known as Dattijo, to shelve his ambition for the governorship and pick the form for Kaduna Central Senatorial District.