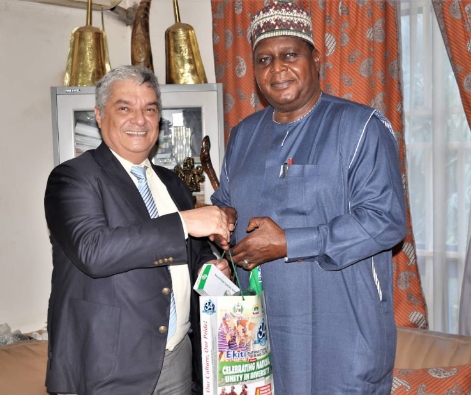 “INAC EXPO 2022 Will Be Stronger And Better – Otunba Runsewe

Plans are in top gear to make this year’s International Arts and Crafts (INAC) Expo bigger and more culture friendly.

This revelation was given by the Director General of National Council for Arts and Culture, Otunba Segun Runsewe in his office when he received in audience, the Ambassador of the People’s Republic of Turkey, His Excellency, Hidayet Bayraktar who visited him in his office.

The Director General, Otunba Segun Runsewe who expressed delight in the visit of the envoy said the diplomatic relationship between Nigeria and the Republic of Turkey dates back to 1962 and has since grown with much strength and friendliness.

Runsewe promised to deepen the participation of the Republic of Turkey by providing a media platform where the country will showcase its cultural potentials.

The Ambassador added that his embassy has facilities for exhibitions and hopes to partner with NCAC to put them into proper use.

Ambassador Hidayet Bayraktar also revealed that the Turkish Embassy has concluded arrangements with the Nigerian Television Authority (NTA) to be featured in a culture related programme on Saturday to showcase their country’s tea and coffee health benefits.

The envoy revealed that a number of Nigerian students who graduated from schools in Turkey have formed an alumni in Nigeria adding that the alumna will be celebrated by the embassy in April this year.

Also to deepen ties with Nigeria, according to the Ambassador, two universities will be visiting Nigeria to conduct screening exercise for intending Nigerians with a view to offering them scholarships.

The Ambassador opined that the Council should create a platform where there would be a strong collaboration between Nollywood and the Turkish Embassy to showcase both country’s rich cultural heritage through films.

The high point of the courtesy call was the exchange of gifts from the Ambassador and the NCAC Boss.