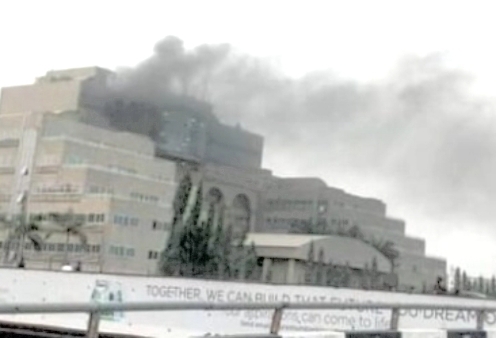 An explosion has ignited a fire outbreak which has gutted part of a building at the Federal Ministry of Finance located in the Central Business District, Abuja.

The details are sketchy as journalists were restricted access to the building while a few other journalists who were granted access were also not allowed to independently verify the extent of damage to the property.

However, black smoke was seen billowing from a part of the building, following the fire outbreak on Wednesday morning.

The spokesperson of the Ministry of Finance, Olajide Oshundun told reporters that the fire started early morning around 6:50 am, adding that some staff of the Ministry noticed smoke emanating from the room that houses the battery for an inverter.

Oshundun said the fire was put out with fire fighting equipment at the Ministry within twenty minutes and that the effect of the fire incident is minor as it only affected the basement of the Ministry.

Also, the Federal Ministry of Finance in a tweet explained the cause of the fire outbreak, saying that the incident occurred on the corridor in the basement involving an isolated battery pack and it has been put out by the security personnel on duty.

The fire outbreak is just the latest of many that have affected government offices in Abuja.

In May 2020, the fire burnt a part of the Nigerian Postal Service (NIPOST) building in the FCT.

A month before that incident, a building housing the office of the accountant-general of the federation (AGF) was gutted by fire.

It cannot be independently verified if the fire gutted documents at the building as most reporters were barred from going into the building.

Security agents at the building had earlier denied that a fire incident took place, even as no official has spoken on the explosive sound that sparked the fire incident.

Like Loading...
Previous PostUnsigned Electoral Bill: CNPP Urges Nigerians To Step Up Pressure Over Delayed Assent Next PostFFK: Only a Fool Runs From His Shadow