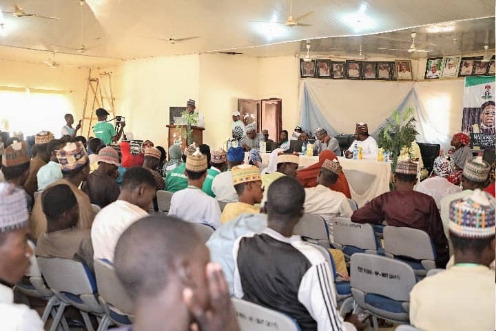 Resist Temptation, Use Your Number To Change Your Situation, CNG Charges Students

At the 19th edition of the Maitama Sule Leadership Lecture Series organized by the Students Wing of the Coalition of Northern Groups (CNG) at the College of Education Sokoto, youths were challenged to use their intimating number to secure their future.

Firing the first salvo as Chairman of the occasion, Professor Usman Yusuf, former Executive Secretary of the National Health Insurance Scheme (NHIS), reminded the youth that they have the number to sufficiently bring about change.

He warned that the youth cannot afford to seat back and expect things to come to them, noting that life does not come with a remote control.

“You have to stand up and change things by yourselves. Nations all across the world are built by youths. You have what it takes; what it takes is number which you must use constructively in 2023 to change things.

“You cannot seat down and lament while people who have revolved power among themselves for too long continue to use and exploit you,” he said.

He charged the students to reject the tradition of lining up to receive handouts to abandon their future, and choose instead to install a leadership that will make them more secure and provide them with a productive future.

“Work to replace leaders who think power is an end in itself; who mobilize our people only during elections, sowing seeds of division and leaving everyone poorer and more insecure than they were,” he charged.

The paper presenter, Professor Abdullahi Abubakar of the Department of Political Science, Usman Danfodio University, Sokoto, dwelled on the linkages between social inequality, poverty and armed banditry in northern Nigeria while blaming the youths for not being able to effectively articulating their priorities.

The Professor argued that social inequality, poverty and armed banditry can collectively be connected to failure of the state resulting from the inability of leaderships to deliver good and quality governance.

“The generation of leadership we have today, has failed us, and there is therefore, the need for us to urgently do something to put the nation on the right course,” he said.

Noting that conflict or insecurity is among the major development challenges that accompanied Nigeria’s democratization process in the last two decades, the Prof revealed that between 1999 and 2007 alone, over 500 different forms of conflicts or insurgencies were recorded across Nigeria before it was shifted to the northern part of the country.

“These conflicts have manifested themselves in different forms including militancy in the Niger Delta, indegine/settler conflict, agitations for self rule in the South East and South West and killings of northerners in other parts of the country, the Boko Haram insurgency in the North East and banditry in the North West,” he said.

He said that while some of these conflicts are politically motivated by few elites, many others are connected to the attitude of political leaderships in relation to public goods provision.

In his remarks, Nastura Ashir Shariff, the Board of Trustees Chairman of the CNG lashed at the managers of the nation’s petroleum industry and oil marketers on the current hardships resulting from an artificial fuel scarcity which he said, is deliberate aimed at paving the way for increment of pump prices.

He said the aim of the scarcity is to finally hike the prices of fuel and impose maximum sufferings on the population in the face of the current multiple and pervasive challenges around security and the economy.

“The civil society must mobilize the citizenry to defend our collective interests by challenging and firmly resisting this new antic by those who are mercilessly bent on subjecting us to perpetual slavery in our own country for their selfish, capitalist interests,” he said.

Capping the event, CNG’s Spokesperson, Abdul-Azeez Suleiman advised the students to familiarize with the values of the CNG.

“As students who have shown a commitment to the goals and ideals of the CNG, I will start by advising you to familiarize yourselves with its goals and accept to live with them.

The CNG, he said, has already made a mark as a strong voice, although many would say it is a voice that should speak a different language, or speak in a tone more welcoming to their interests.

“As legitimate and natural claimants to the task of reshaping the North, you have a major role to play in rescuing our region from the margins of irrelevance, impotence, inconsequence and decay in the context of the current Nigerian nation,” Suleiman said.