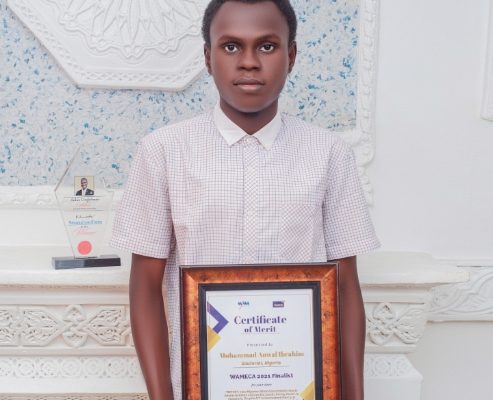 My Emergence As The Youngest WAMECA Runner Up (Finalist)

Contents show
1 The Birth of The Good News
2 Making The Shortlist
3 The Winning Story
4 Being Among The Best Journalists In West Africa
5 Winning A Merit Award
6 Recognition
7 Comments
8 Appreciation
9 The Joy
9.1 Kindly Share this story via:
9.2 Like this:

The Birth of The Good News

When I submitted my two-part series stories for the prestigious WAMECA 2021 in May, 2021, I never thought that my story would excel so high among the works/entries of veteran journalists in our region (west Africa) owing to the fact that I am just starting my journey.

To my surprise, I received a call from the Media Foundation For West Africa (MFWA) on Wednesday, October 6, 2021 in the morning. From his (the caller) introduction, I knew he must be saying something exciting. He said he was calling me from Voice of Nigeria (VON). That morning call made my breakfast joyous. He added that he was calling on behalf of his colleagues from Ghana to ask if I received any email from them. I answered ‘no’.

Though he didn’t break the news, I began to think that it was somehow related with #WAMECA2021 because that was the only thing I applied that’s associated with MFWA and two, I was aware that 2021 nominees were already notified, unknowingly that I was already shortlisted for the prestigious west african journalism award. Just that my email didn’t show.

He got back to them and they sent another email within few hours that gladdened my heart. Due to the poor network in the area I was at that time, they had to call and inform me that they have sent it again. This was an international call, all the way from Accra, Ghana.

This is the most amazing news of the year to me. Not because I haven’t won any award or the story hasn’t won any award before, but because of the recognition it came with. This was the third time I won a journalism award at both national and international levels in 2021 with a single story. Plus Youths Digest Journalism Awards 2021, with a different story, making four awards in one year.

When shortlisted finalists were notified via email, I was busy congratulating people like Mr Uthman, unknowingly that I would later be congratulated too. As Allah planned, many people fecilitated with me. People that I don’t even know. Good people everywhere. Felicitations of different kinds. Many have rejoiced with me when they learned about this development. Glory be to Almighty Allah.

Even though I joined the award virtually, I wished I was in Accra in person to attend the ceremony. But I had to write an examination that Friday in the morning which several people advised that I should stay back and write.

I will therefore, extend my sincere appreciation to the organizer of this award (Media Foundation for West Africa) and also to the five-jury panel for finding my two-part series worthy of the shortlist. These judges are people drawn from various countries. They are: Cameron Duodu (Ghana), Joseph Warungu (Kenya), Reyhana Mastersmith (Zimbabwe), Hamadou Tidiane SY (Senegal), Selay Marius Kouassi (Cote D’Ivoire).

I am so extremely happy. This is an award that one doesn’t buy but wins after competing. It gladdens my heart when international communities grade my works high and higher. This is as result of nothing but the Will of Allah and then a clear demonstration of truth as a basic principle of journalism, in my reports.

From the finalists shortlisted, it seemed that I am the youngest of all by profession (as a freelancer), qualification (as a 200 level student, then) and age (at just 20). I was satisfied for just making the list. Because to be in the midst of these west african journalism giants is so fulfilling. Alhamdu lilLah! Glory be to Allah for sparing my life to witness this day (WAMECA 2021 awards).

I had it in my mind that very night, ‘that whether I win an award tonight or not, I am satisfied.’

I don’t really know how to describe my happiness. I think this is something so huge owing to the fact that I am an ordinary 200 level university student in Nigeria. It means a lot to me.

These stories are among my early investigative stories. In fact, they are among my first 10 stories. And they were my number 3 & 4 published stories, accordingly in 2020. If I may add, the story got me shortlisted for three major journalism awards among which I was announced as the champion of the Inaugural Lekan Otufodunrin Journalists Award 2021, emerged as the first runner up, ICIR Investigative Journalism Award 2021 on Saturday immediately after WAMECA and reached the finalist stage of the prestigious and highly competitive WAMECA, (the biggest of all), all in 2021.

The most interesting thing is that, it is only these same stories that keep winning all these awards. Though the investigations were not published by leading media organisations, they are out flying and shining, today.

However, they turned out fruitful. It took about 2-3 months to be completed. And it was a self sponsored series. Hence, no one supported the story with either data or resources.

I don’t know what the various jury at both national and international levels considered in grading this series so higher that was not even published by any leading media organisation. Though I have seen judges report for one of the awards. Whatsoever, Glory be to Almighty Allah.

Being Among The Best Journalists In West Africa

It might also interest you to know that I started journalism profession in 2020 before lockdown. That is to say, I started it two years ago.

Becoming one of the finest journalists in west africa within a short time frame is a great achievement more especially to a part time journalist. I am happy to be among those described as “ace Nigerian journalists” by Mr Alfred Olufemi as reported by Premium Times.

This shows that I am one of the best journalists not only in Nigeria but in West Africa which is a great achievement at this age of mine.

As a 2021 WAMECA nominee, there was nothing that excites me more than turning left and right to see people with doctorate, masters and bachelor degrees sitting together with me on the flier as their fellow WAMECA 2021 finalist, despite not having any of the above class of degrees.

Not only this, contesting in the same category with a visiting scholar at the University of Oxford, Gideon Sarpong, excites me more.

I was delighted when I was awarded with a certificate of merit for being a finalist in the ICTs and telecommunications reporting category of the prestigious WAMECA 2021 held at Alisa hotel, Accra, Ghana.

The only sad thing about this, is that I couldn’t travel to Ghana despite receiving an invitation due to exams that I was advised to write. I wished I was there because of the joy that comes when one is announced as a winner of a highly competitive award. The feeling, the noise and the clapping that follows as one moves to the stage, makes him feel as if he is traveling for a long time to receive the award. How I wished I was in Accra, Ghana’s capital territory.

Alhamdu lilLah it has landed in Nigeria.

Making WAMECA shortlist has earned me more recognition and respect from media giants and veteran journalists in Nigeria and beyond. All I can say is Alhamdu lilLah.

For making this list, I was featured in daily trust newspaper (online), Nigerian giant daily newspaper and its Hausa version, Aminiya, in print edition. All of these were courtesy of Mal. Hussaini. Thank you sir. May Allah reward you.

I was recommended for a journalism role by the Online Editor of Punch Newspaper to serve as a freelance writer with the Punch Newspaper (online). This can not be achieved if not because of truth.

I was interviewed by others including a PhD who interviewed me in his Alheri Radio program whenever I achieve a feat.

My connections online increased in LinkedIn and Facebook which may not be unconnected with this development. Thank you all.

I want to share some comments I received from experts and senior journalists with you.

You have done excellently well. Definitely, you are one of the bright brains we should look out for. Keep it up! – Hakeem Onapajo, PhD, Nile University, Abuja

Congratulations! It only gets better from here. -Banjo Damilola, WSAIR, Journalist of the Year 2020

Congratulations and well done. Very proud of you and see you going higher and higher. This is a very worthy acknowledgement. – Lekan Otufodunrin, Executive Director, Media Career Development Network

My appreciation goes to my father for picking up the award when it arrives Nigeria at Stratton hotel, FCT, Abuja, on my behalf, despite being Monday out of his tight schedules.

I will also extend my appreciation to the Media Foundation for West Africa for honouring me with such an award of merit, among journalists who have crossed the boundaries of excellence in west africa and same goes to the jury for finding my story worthy of the shortlist out of over 700 entries from west africa.

My appreciation also goes to Ms. Adiza of MFWA for bringing this award to Abuja, Nigeria all the way from Accra, Ghana. My father told me that you have reiterated to him that I contested with some of the best journalists in West Africa. Elated. I really appreciate all of you.

Before I end, I will thank my parents for all what they have done, senior colleagues and my editor who gave me the platform to showcase my work. I can’t thank them enough.

This is all about the joy of making the shortlist of the prestigious, highly competitive West African Media Excellence Conference and Awards (WAMECA) 2021, @20, becoming the youngest finalist ever since inception in 2017. Not only that, but being a 200L university student (due to strikes and lockdown) in Nigeria to make the list.

Alhamdu lilLah may Allah bless it.

He can be reached via awwalbinibrahim@gmail.com

Like Loading...
Previous PostAFCON: Defeat To Host Country Is Harsh Reminder Of Eagle's Exit - Celia Osakwe-Hibbert Next Post1st Holiday Village In Africa To Be Cited In Lokoja, Kogi State