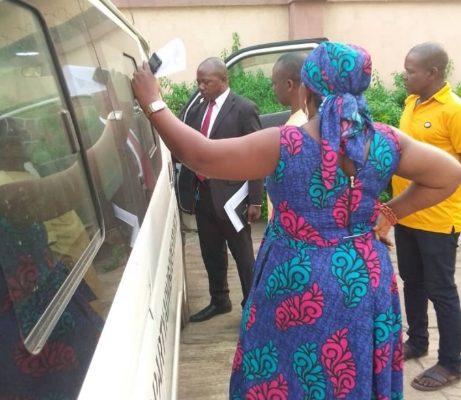 In his brief remarks at the handover ceremony, on Thursday in the full glare of other IPAC executives and members, appreciated the immense support during his tenure from the state Governor, Rt. Hon. Ifeanyi Ugwuanyi and the entire IPAC members in the state.

This is the first time there was a smooth transition power from one elected executive to another in the Enugu State chapter of IPAC.

Giving account of his stewardship, the former IPAC chairman noted that even though he inherited nothing from his predecessor on December 2, 2019 when he took over, his administration has elevated the state IPAC to a “status of envy”.

Among others giant strides, Barr Ken Ikeh IPAC leadership said it bequeathed to the council a befitting operational Toyota Hummer Bus with Registration No: 1ENSG 5642, an efficient and debt free office secretariat at a prime location in the state capital, with a female staff whose only outstanding salary is January 2022.

To guarantee continuity and smooth take off by the new executive, part of the documents and vital correspondents handed over to the new IPAC chairman, Chief Edwin Alor, included particulars and keys of the operational bus and application for official plate number code for IPAC dated 13 January 2020.

Other vital correspondents are document relating to the Women and Youth Empowerment Program of APPEALS Enugu, which is over 95% completed; proposal for a permanent office in Enugu Urban, which is an ongoing programme; requests for courtesy visits, and documents relating to the 2022 IPAC election, including a letter to the Manager, United Bank for Africa (UBA) for change of signatories to IPAC bank account, wherein the former Chairman has already signed off.

Barr. Ikeh who noted that “to the Glory of God, the end is better than the beginning”, said his expectation is “to see a more harmonious and goal-oriented IPAC Enugu State.”

The Notary Public of Nigeria concluded by pleading with his colleagues and everyone to forgive him if he had erred in anyway while in office.