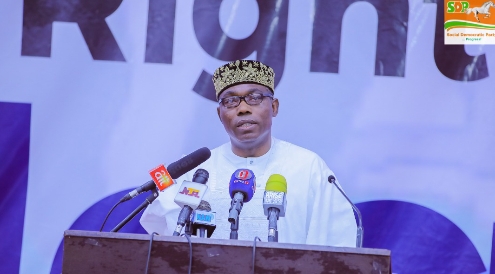 Prince Adewole Adebayo, the presidential flagbearer of the Social Democratic Party (SDP), has disclosed on why he turned down an invitation to speak on his manifesto at Chatham House in London.

Speaking on Monday, January 23, at the Nigerian Institute of International Affairs (NIIA) in Lagos, Adebayo noted that he refused to go outside Nigeria to speak on his presidential ambition because of his deep regard for the country’s sovereignty as a free state, The Punch reports.

In his opinion, presidential candidates who were in Chatham House had “further ridiculed and devalued the nation before the world by their appearances.”

According to him, NIIA, set up in 1961, has the capacity to adequately advise Nigerians on what to say on the international stage in line with Nigeria’s foreign policy.

He, therefore, submitted that before going anywhere else in the world, presidential candidates should have first visited the institute and shared their ideas.

His words: “NIIA was set up in 1961 exactly for this purpose that our foreign policy thinking should be scientific, strategical, well reasoned, well researched, and this institution has the legacy at the background and the capacity to advise you on what to say on the world stage.

“All over the world, before you go out to say anything about Nigeria or your country, you go to the premier diplomatic institute in your country and exchange ideas so that outsiders will understand that what you are saying is in tune with diplomatic policy and doctrines of your country.”