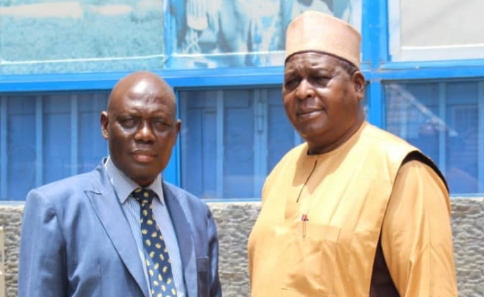 In a bid to strengthen the cultural and bilateral relationship between Nigeria and the Republic of Uganda, the Director General National Council for Arts and Culture, Otunba Segun Runsewe has declared his intention to launch the Nigeria/Uganda friendship club.

The Director General made this known in his office when he played host to a delegation from the Gambian Radio and Television Services who were in his office as part of their working visit to Nigeria.

Otunba Runsewe who expressed delight over their visit to the Council said he has tremendous respect for the people of Gambia for their unwavering efforts in sustaining their good cultural heritage.

According to Runsewe, the good relationship between Nigeria and Gambia was visible when both countries collaborated effectively during their participation in some International Tourism events when he headed the Nigerian Tourism Development Corporation (NTDC) adding that the Gambian Embassy was the first to pay him a courtesey visit when he assumed duty as the Director General of NCAC.

“The best way to promote any nation is through its brand identity. If Gambia develops a strong brand identity, it will be easy to market the brand” Otunba Runsewe maintained.

Earlier in his address, the Director General, Gambian Radio and Television Services and the head of the delegation Mr. Malik Gyang said they were on a working visit to the Nigerian Television Authority (NTA) with a view to exploring areas of mutual partnership, experience sharing and networking.

He noted that given the good track record of Otunba Runsewe who has positively projected the image of Nigeria home and abroad within the Culture and Tourism space, the delegation was moved to visit the NCAC and seek possible areas of collaboration to move the arts and tourism sectors forward.

The head of the delegation opined that both countries need to work assiduously in transforming their rich and diverse cultural heritage into a viable economy to complement the gains from oil as both countries share similarities in many ways.

Also speaking, the Director General, News of the Gambian Radio and Television services said that Gambia has a similar Council for Arts and Culture which informed their need to tap from the rich experiences of Otunba Runsewe to improve on their activities in Gambia.

He said the Republic of Gambia will be delighted to recieve the the Nigerian Cultural icon in their country to share his wealth of experience in the areas of Culture and Tourism with them.

The Director General, NCAC presented cultural gifts to all the members of the delegation.