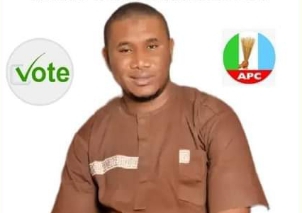 Bello made this call while ago in Lokoja after his principal picked APC’s Expression of Interest and Nominationin Form to run for the State House of Assembly, representing the good people of Idah Constituency.

In his word, “I am a politician and I have my political schedules for the season but for the interest of the good people of Idah Local Government Area, I have to collapse my political agenda to rally round Comrade Muhammed Okpanachi Akwu and ensure he becomes the next House Member representing Idah Constituency in the State House of Assembly”, he said.

Rankwata also added that, Comrade Ajason has tremendously impacted on the Party since 2014.

From abinitio, he was engaged in the production of Table water for the Campaign Rally of late Prince Abubakar Audu in the 21 Local Government Areas in the State.

He also recently Produced up to1000 packs of Table water with Gov. Bello Label on the bottles for the presidential declaration at the Eagle Square Abuja.

More so, Comrade Akwu Ajason bought new Generator for the party secretariat with some amount of money for the renovation of the party office.

Rankwata said “Governor Yahaya Bello doesn’t have a God-Father but has Father God as his supporter, so God will also assist his principal Ajoson to become the next honorable in the State House of Assembly from Ifah Constituency.

Comrade Ajason according to the Technical Adviser to Ajason Campaign Organization, Mr Adejoh Salifu Suleman Musa is a God fearing man and a philanthropist who has touched many lives with passion to doing more.

To attest to Ajason’s fitness, his antecedent shows that if he wins, it will be a win-win for the people of Idah.

Mr Adejoh Salifu pleaded with all the Delegates from Idah Local Government Area to come out massively and vote for comrade Jason in the forthcoming primary election.