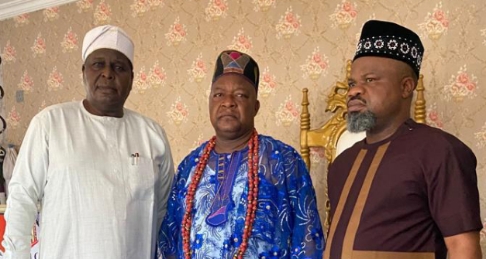 Runsewe who led the peace delegation to the Palace of Oba Oyebi urged the monarch as representative of Ogun State government and custodian of security in his domain, to ensure lives of all residents in Arepo are safe and secured and to see that the issue of security is non-negotiable.

Recalling how he (Runsewe) led the Lagos NUJ council to Arepo to secure the Journalists land in 2003, the DG NCAC said the Arepo community has today become a reference point in global history due to the presence of two Journalists estates there.

He appealed to the monarch to see the recognition of his domain with the identity of Journalists as a very positive drive for progress in the fast growing border community with proximity to Alausa, Lagos State.

According to Runsewe “Establishing two Journalists Estates here in Arepo and identifying such residential areas with an arch, should be seen as a positive brand identity that can help boost growth and development in Arepo community.

“We would want to report back to both Ogun State Governor, Prince Dapo Abiodun and Abuja, who gave us the authority of mediation that kabiyesi has accepted to the reerection of the demolished Journalists Estate Phase One arch at the soonest opportunity; hence we need you to accede with your authority even though the government has given official approval”, Runsewe told the monarch.

He reminded the monarch how Ogun State government in 2008 reconstructed and named the major community Road as Journalists Estate Road because of the presence of two Journalists Estates and equally upgraded the status of the monarch, all which have contributed to the expansion and growth seen in the town.

Runsewe pleaded that the monarch meet with all warring parties and ensure that all court cases instituted as a result of the lingering crisis particularly in respect of right of passage on the portion of the road within Journalists Estate Phase One are withdrawn and reconciliation meetings held to put an end to the crisis that is putting Ogun State in bad light.

“Kabiyesi, with the ongoing road construction, you are about to experience more government development in your domain and you need the Journalists to identify and project you rightly; you really do not need the bad publicity which could likely embarrass the Ogun State government and the country as a whole”, Runsewe admonished.

The DG National Council for Arts and Culture announced that once peace is fully restored and all cases in court withdrawn, the Arts Council will establish a mini-museum in the palace of Olu of Arepo.

In his remark, Isiguzo asked the Olu of Arepo to embrace the olive branch offered by the delegation and call everyone together for a conversation on how to ensue peace in his domain, Arepo especially with Journalists.

Isiguzo noted that Journalists are very essential professionals who are loved all over the world and it is very difficult to hate Journalists because of their kind of trade.

“All over the world, brand identities exist so also the security of lives of Journalists has become non-negotiable due to the nature of their job, so we would appeal that you support the moves to reconcile all parties and secure all lives especially those of Journalists in your domain”, Isiguzo canvassed.

He disclosed that state Governors of Nasarawa, Bauchi, Oyo and others have already taken the positive cue from Ogun State and are giving lands to NUJ to establish more Journalists Estates “because of the success and antecedent of Lagos NUJ Council and it would really be a shame if the pilot Journalists Estates in Ogun State are now experiencing such crisis from host community, Arepo”, Isiguzo lamented.

Also speaking at the peace meeting, chairman, Arepo Community Development Committee (CDC), Ganiyu Kazeem expressed delight at the peace moves initiated by Otunba Runsewe and the leadership of Journalists, NUJ, urging Oba Oyebi to reconsider the situation in Arepo town which is fast degenerating and seize the opportunity to promote peace among all members of the community.

The Olu of Arepo in his response said, he is not aversed to the reconciliation moves by the delegation but would need to hold a meeting with his council members and then fix a meeting for another time to give a feedback.

He expressed his distate at the unprecedented media reports in the last two weeks which he noted “defamed” his office and personality in the eye of the public.

Oyebi however agreed that government reserves the right to name the road in his community which it has done, and, likewise the reconstruction of the same road in the community.

He assures that lives of all residents of Arepo including those residing in Journalists Estates 1 & 2 and their families are safe.