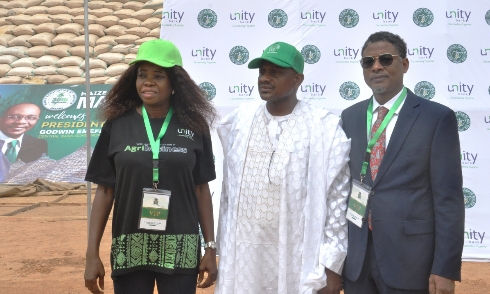 Nigerian maize farmers under the auspices of Maize Farmers Association of Nigeria (MAAN), have commended Nigeria’s agric-focused lender, Unity Bank Plc for its role in facilitating the financing of maize production by smallholder farmers in the country through the Anchor Borrowers’ Programme of the Central Bank of Nigeria (CBN).

The President of MAAN, Dr. Bello Abubakar gave the commendation while delivering an address at the official unveiling of 21 maize pyramids in Kaduna on Thursday.

Abubakar said Unity Bank has proved to be a trusted and reliable partner of Nigerian maize farmers in their journey to sustain sufficiency in maize production in the country.

“What we celebrate today would have been impossible without our finance partner, Unity Bank.

“The Bank has been a reliable partner in the journey and we shall continue to partner to greater heights,” Abubakar said.

Through Unity Bank’s strategic partnership with the maize farmers under the Anchor Borrowers’ Programme of the CBN, which focuses on commodities with significant concerns for foreign exchange, maize production output has risen to 11 million metric tons from 10.1 million metric tonnes in 2014.

As a major financial institution partner of the ABP, the Bank has facilitated the disbursement of billions of naira to no fewer than 4.52 million smallholder farmers across the various commodity value chains supported by the ABP, including to an additional 120,000 maize farmers in 2021 alone.

Speaking at the event, the Managing Director of Unity Bank Plc, Mrs. Oluwatomi Somefun said the Bank remains committed to its strategic partnership with maize farmers to support their capacity to sustain sufficiency in maize production.

She said, “When we say that we are farmers’ best friends, we walk our talk. And I am glad that the association appreciates the invaluable support that we provide by facilitating the financing of their activities.

“As a Bank, we are driven by the overarching objectives of the federal government to drive food sufficiency, while creating the much-needed jobs for sustainable development.”

Represented by Mr. Usman Abdulkadir, Executive Director, Risk Management and Compliance, Somefun said the pyramids displayed is a reminder of the inherent possibilities in Nigeria’s agricultural value chains and a proof that with enough commitment, Nigeria could maximise its potential in agriculture through strategic initiatives such as the Anchor Borrowers Programme.

Since its launch in 2015, the central bank has through the ABP programme, disbursed a total of ₦975.61 billion to over 4.52 million smallholder farmers, who have cultivated 21 commodities across the country for the procurement of inputs and cultivation of maize, rice and wheat.

Maize is one of Nigeria’s most important staple foods, with about 60 per cent of the maize produced in Nigeria used for commercial activities including the production of poultry feeds and as a major ingredient in alcohol production.

Like Loading...
Previous PostGov Sule Reveals Consensus Candidate For APC National Chairman Next PostMillennial Women And The Future Of Africa