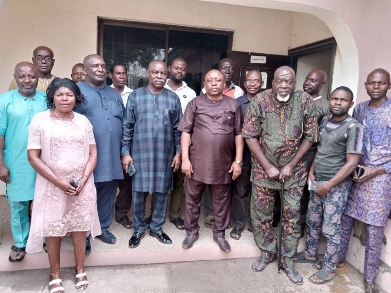 Kachina stated this when officials of BSIEC led by secretary of the Commission, Barr. Manasseh Sereki paid him a familiarization visit in his office.

He appreciated the Commission for conducting a zero litigation election in Benue and enjoined them to continue to work on the Commission’s shortcomings to attain perfection.

The Gboko Council Boss added that his council will on her part, continue to cooperate with BSIEC and to provide a level playing ground for all political parties to participate in the forthcoming Local Government polls in Gboko to deepen democracy at the grassroots level.

ALSO READ  May Day Winner of “Help a Hardworker” Emerges

Kachina expressed regret that a bye election was not conducted by BSIEC to fill the vacuum at Gboko central council ward as a result of the death of Hon. Paul Uchichi even as Gboko Local Government had written officially to intimate the Commission of the development.

Kachina also appreciated Governor Samuel Ortom for dousing tension in the polity through the consensus arrangement which he said, has proven to be successful and called on Benue people abide by the principle.

Earlier, Leader of the delegation, Barr. Sereki had informed that they had come to familiarize themselves with the Council Chairman and to ask him to sensitize party stakeholders across board, religious and community leaders to sensitize their members to register and obtain their permanent voters cards, PVCs to enable the vote in the forthcoming Local Government polls.

He noted that it was not just enough for people to obtain their PVCs but to ensure that they cast their vote to give credibility to the election.

Barr. Sereki was accompanied on the visit by BSIEC commissioner, Emmanuel Agber and Electoral Officer for Gboko, Edward Inya.

Like Loading...
Previous Post2023: A Tale Of Arrogance And Humility Next PostGIIIF Partners AFRIEF, Set to open Up African Impact Investment Opportunities to Islamic Economies Globally