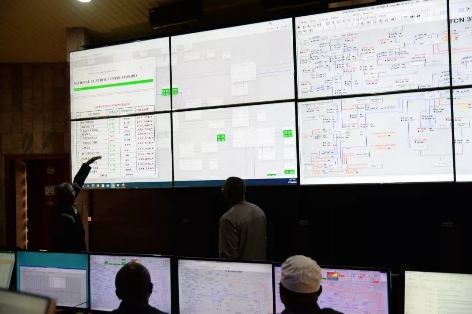 In-house engineers of the Transmission Company of Nigeria (TCN) have deployed a stop-gap solution to improve grid monitoring and acquisition of data from remote stations (power stations and transmission substations) to the National Control Centre.

The TCN Spokesperson, Ndidi Mbah said in a statement that the feat was achieved by utilizing the Internet of Things (IoT) solution, and Virtual Private Network (VPN) by using various Internet Service Providers (ISP).

“This temporary use of the Network Automation System was deployed to assist TCN in conveying critical operational measurements data from remote stations to NCC using Web Technology, which is an integral component of the IoT.

“So far, the data received from remote stations has enabled NCC to obtain more insight into the situation of the power flow on the grid and has enabled NCC to make decisions that have impacted positively on the security and integrity of the Grid.

“The stop-gap solution became necessary as TCN could not access and receive comprehensive operational data of the entire power grid for managing the fast-growing system”, she explained.

“The fact that several stations were never integrated into the existing SCADA at all, and made grid visibility and management very difficult and inefficient.

“The deployment of this stop-gap solution mitigates most of the challenges posed by the absence of Remote Terminal Units at the stations which were not captured in the last SCADA World Bank Project of 2004 and the stations that use Substation Automation Systems that are proprietary in design.

“The design made it difficult to integrate other substations into the existing inadequate SCADA System.

“Today, however, with TCN’s stop-gap solution the grid operators can see a much wider part of the grid making grid control a lot easier and more efficient.

“For any transmission company, grid management involves levels of control that help to ensure grid security and stability which includes Automatic Generation Control involving real-time interaction of the SCADA System algorithm at the Master Station with a plant or generator at a Power Station, ancillary services activation, and automatic load shedding which define the control level (primary, secondary, tertiary) operations of the grid which is obtainable in the Systems Operations units of any power grid.

“The stop-gap solution has helped TCN’s system operators to better manage the grid, but this can only serve as a temporary measure and therefore cannot match or be compared to the efficacy of a complete SCADA System in terms of robustness, functionality, security, and stability of the grid.

“While the stop-gap measure subsists, the company will continue to pursue the ongoing process for the acquisition of a full-scale SCADA system”, Ndidi Mbah said.

Like Loading...
Previous PostNigeria To Strengthen Bilateral Relationship with Cuba Through Arts And Culture Next PostInternational Women's Day: CNPP Condemns Rejection of Gender Equity Bills, Speaks On What Lawmakers Must Do