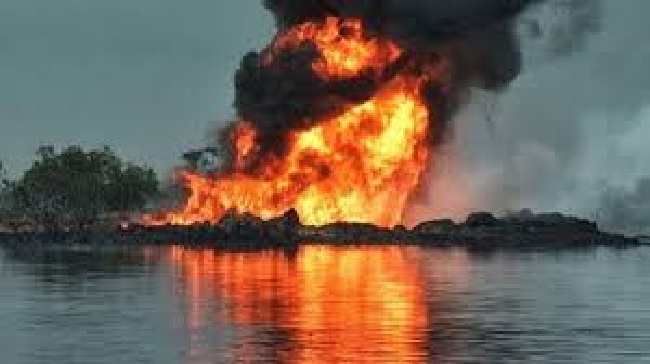 The Leadership of Egbema Offshore Communities have sent a demand notice to the Shebah Exploration and Production Company Limited ( SEPCOL) in OML108 over the explosion of the Floating Production Storage And Offloading Vessel ( FPSO) in Delta State that had about 50 thousand barrels in storage that exploded and resulted to oil spill which caused destruction and damages of fishing items/Properties , environmental Pollution and acquatic life etc.

The Egbema Offshore Communities in their letter of demand notice signed by Comrade Mike JK Tiemo and others, explained in part that the explosion Which occured in the early hours of Wednesday 2nd February 2022 affected 250 inhabitants whose fishing Properties were damaged and destroyed, Polluted Environment and the death of acquatic life Which calls for urgent need for relief materials to be sent to the Egbema Offshore Communities, clean up of the environment,and adequate compensation to the affected communities.

Comrade Mike JK Tiemo the National Leader and Niger Delta Humanitarian Rights Activist who spoke extensively on behalf of the Egbema Offshore Communities during an interactive session,
assertted that they are the host Communities to Chevron Nigeria Limited as regards Offshore operations
with established and signed offshore memorandum of understanding
(OMOU’s) including Gbaramatu and Ogulagha Offshore Communities , Delta State Government and Chevron Nigeria Limited, being parties in business in the same operational vicinity of SEPCOL company operation that is near by.

Comrade Mike Tiemo, the National Leader of the Egbema Offshore Communities, and renowned Nigeria Delta Humanitarian Activist emphasized in their demand notice that the exploded vessel and the resultant spill effect have devastitated their only means of occupation and livilhood which has led the Egbema Offshore Communities to experience unexpected hardship, unbearable situation and predicaments to the inhabitants.

Comrade Tiemo expressed the position of the aggrieved Egbema people saying: “We the Egbema Offshore Communities hereby declare and demand the sum of Five Billion Eight Hundred Thousand Naira (5,800,000,000) as compensation to our communities and and the over 250 inhabitants affected in respect of the oil spill, destruction and damages to fishing properties/items, environmental pollution and aquatic life etc due to the adverse effect, and predicament the concerned numerous victim/inhabitants of the communities are currently undergoing or exposed to.

Conclusively, Comrade Tiemo said: “We wish to make it once again abundantly clear to Shebah Exploration and Production Company Limited that the Egbema Offshore Communities also want the Management of the Company to address other Paramount issues of mutual benefit to all relevant stakeholders and concerned Parties in accordance to the Petroleum Act or law of the FG as demonstrated by Chevron Nigeria Limited Offshore Operations in the near by vicinity where SEPCOL operates.

The Group further more, called on the Delta State Governnor, His Excellency, Senator Dr Arthur Ifeanyi Okowa the Executive Governor of Delta State, Upstream Petroleum Regulatory Commission (NUPRC), National Spill Detection And Response Agency NOSDRA to use the instruments of their good offices intervene and direct the management of Shebah Exploration And Production Company Limited to do the needful and the rightful thing to the numerous affected Communities and inhabitants whose fishing Properties/items were damaged and destroyed by the incident and oil spill occurs come which took place on the 2nd of February 2022.