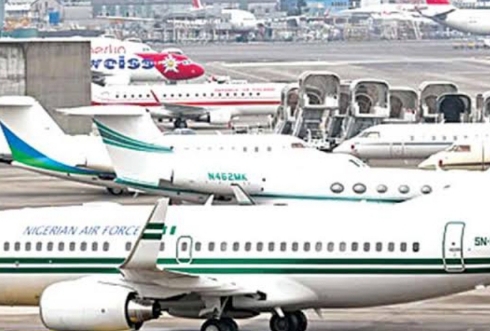 Contents show
1 AON ACCEDES TO CALLS FROM GOVERNMENT, SUSPENDS ACTION IN GOOD FATE
1.1 FG Gives Assurances of Continued Flight Operations
1.2 Kindly Share This Story With Friends via:
1.3 Like this:

The Airline Operators of Nigeria (AON) has suspended its decision to withdraw its services across all airports in the country hours to its Monday deadline.

It explained that the suspension of the decision was in the interest of the national economy and for security considerations.

AON President, Abdulmunaf Sarina who is also the Managing Director of Azman Air, announced the suspension on Sunday in a statement jointly signed by six members of the Association.

Others who signed are Shehu Wada, the Executive Director of Max Air; and Obiora Okonkwo, the Chairman of United Nigeria Airlines.

Earlier, the Ministry of Aviation had assured Nigerians that members of AON were reviewing their decision to withdraw services on Monday, May 9.

It confirmed that Ibom Air, Green Africa Airlines, Arik Air, Dana Air, and others said they would carry on with their normal flight schedules.

The statement from the operators reads:

The Airline Operators of Nigeria (AON) wishes to inform the general public that further to numerous calls from the highest echelons in government with promises to urgently intervene in the crises being faced by airlines due to the astronomic and continuously rising cost of JetA1, that the AON has acceded to requests to withdraw the action for the time being while we allow for a fresh round of dialogue with government in the hope of reaching an amicable solution.

We have also reached this decision with the highest consideration for our esteemed customers who have been faced with uncertainty over the last few days and to enable them to have access to travel to their various destinations for the time being during the period of discussions with relevant authorities.

In view of the above and in the interest of national economy and security considerations, AON hereby wishes to notify the general public that the earlier announced shutdown of operations on May 9, 2022, is hereby suspended in good fate pending the outcome of hopefully fruitful engagement with government.

The Federal Government had earlier assured Nigerians that some of the airline operators had agreed to continue flight operations.

Mr James Odaudu, the Special Assistant (Public Affairs) to the Minister of Aviation, Hadi Sirika, disclosed this in a statement on Sunday.

“It is gratifying that members of the association have started reviewing the decision to withdraw flight services, with Ibom Air, Green Africa Airlines, Arik Air, Dana and others confirming that they will carry on with their normal flight schedules,” said Odaudu.

“We hope that other members will consider the expected impact on businesses and individuals and review their decision. We also wish to assure foreign airlines operating in the country that all logistics and services for their operations remain in place as usual and that no disruptions whatsoever should be envisaged.”

According to him, the ministry has received a series of enquiries since airline operators issued a notice of withdrawal of flight services as a result of the rising cost of Jet A1 (aviation fuel).

The minister’s spokesman stated that the decision of the association was purely a business one, saying members were private businesses reacting to market forces but appealing for interventions to enable them to carry on with their operations.

He added that the ministry has made conscious efforts to assist the group, including facilitating a meeting with President Muhammadu Buhari, during which they got several concessions such as duty-free importation of aircraft, engines, spare parts, and other components.

“The honourable minister at various times personally took members of the association to engage with Central Bank of Nigeria (CBN) to sort out issues of access to foreign exchange (FOREX) for their operations, and also the NNPC to exploit ways of ensuring the availability of Aviation fuel (JET A1) through importation or from the major marketers,” Odaudu said.

“It should also be recalled that members of the association were also considered for and given bail-out funds to the tune of N4 billion during the COVID-19 pandemic to ensure that they remained afloat.

“This was without prejudice to the fact that most of them were heavily indebted to aviation agencies (as they still are). We believe that members of the association are patriots who have continued to bear the brunt of an unfavourable oil market for which we salute their doggedness.”

The government, according to the minister’s spokesman, remains committed to the continued growth of the aviation industry where airlines and other service providers operate in a profitable and competitive environment.