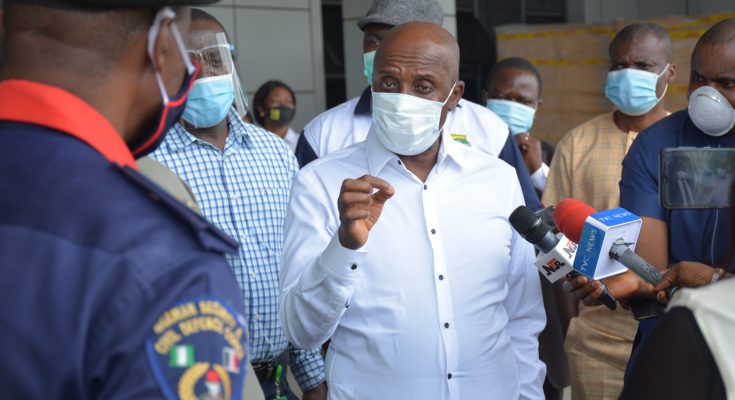 Nigeria’s Minister of Transportation, Chibuike Amaechi, has explained incessant breakdowns of locomotives on the Abuja-Kaduna.

The Minister who spoke in Lagos while monitoring the progress of work done on the Lagos-Ibadan rail corridor barely a month after its commissioning blamed the development on lack of spare parts to replace worn-out ones.

According to him, “the issue with the breakdowns of the Abuja-Kaduna train is down to lack of maintenance, which is attributable to a lack of spare parts.

“We have written to Mr. President on this issue and he has graciously approved the purchase of spare parts for the Lagos-Ibadan trains.

ALSO READ  We Will Be Truthful to Nigerians, Ensure Freedom Of Worship, Instill Patriotism in Citizens – SDP Presidential Candidate

“Very soon, enough spare parts for the Lagos-Ibadan rail will arrive the country.

“By the time this occurs, we will use some of these parts for the Abuja-Kaduna and, hopefully, the issue of incessant breakdown of the trains will be resolved.”

Amaechi added that the failing trains were those bought in 2016, noting that they had worked optimally until now.

He maintained that time had indeed come for the trains to be serviced with new spare parts.

In a parley with journalists in Lagos, the Minister noted that the Nigerian Railway Corporation, NRC, is fine-tuning coordination of the fully installed communication and signaling system.

Amaechi added that when that is done, the number of trips on the corridor will be increased from the current four to eight per day.

On traffic congestion, the Minister said: “On the Lagos-Ibadan route, 42,000 passengers were moved in June.

“We expect the figures to surge in the coming months because if we could convey 42,000 a month after commissioning, then the figures can only increase as more people become aware of the train services.”

Speaking on the poor remuneration and welfare package of staff members of the NRC, the Minister admitted that the corporation ranks least amongst other agencies under his purview, even as he pledged an upward review of same as quickly as possible.

On use of local content for ongoing rail projects, Amaechi said indigenous contractors have failed to meet some prerequisite stipulations such as five years’ experience in rail construction.

According to him, most of these local contractors can be likened to “commission agents” and considering them for such projects is tantamount to signing death the warrant of Nigerians.

The Permanent Secretary, Federal Ministry of Transportation, Dr. Magdalene Ajani, Directors of the Ministry and NRC accompanied Amaechi on the inspection.