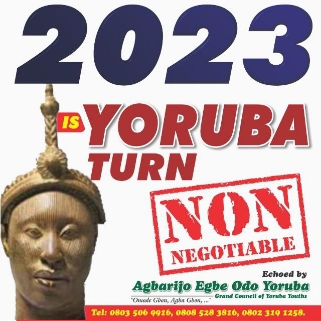 Contents show
1 …Set for Memorial of Ayo Fasanmi, Burial of Comfort Ogunkeyede
1.1 Kindly Share This Story With Friends via:
1.2 Like this:

…Set for Memorial of Ayo Fasanmi, Burial of Comfort Ogunkeyede

The Aare Apapo (President General) of the group, Comrade AWA Bamiji, in a statement said they are glad with the turn of events and the “timely issuance of the Communique of the meeting of the Southern Governors’ Forum which has a far reaching effect in solving the immediate and remote problems that are threatening the security, equity, fairness, justice, progress and peaceful co – existence among the various ethnic Groups of this Country.”

Above all, is the issue of 2023 Rotational Presidency. Your equal voice that supported the turn of the South in 2023 has finally laid to rest the fear of possible contest by any peace loving Aspirant from the North.

We therefore urge Mr President and the National Assembly to geniunely embrace every bullet point of this Communique at this crucial moment when the Country is at crossroads.

With this, the labour of our Heroes past and our collective struggles in making the June 12, Nigeria’s Democracy Day, won’t be in vain. The Unity of this Nation will then continue to be our collective Hallmark.

We, by this medium, celebrate Mr Babatunde Fashola, SAN, and Senator Ajibola Bashiru, former Governor of Lagos State and the Honourable Minister, Federal Ministry of Works and Housing and Senator representing Osun Central Senatorial District, who was also Commissioner for Justice and Attorney General, Osun State, during the last administration of Ogbeni Rauf Aregbesola on the occasion of their Birthday anniversaries, 58 and 49 years of age respectively.

To this end, we say Many Happy Returns to these 2 Political Heavyweights of Yoruba extraction.

The Late Quintessential Leader of Afenifere, Jagun Osin of Iye – Ekiti, Seriki Agba Akin of Osogbo, a longstanding Symbol of Integrity in the Southwest Region for over 6 decades and the 2016 Grand Council of Yoruba Youths Awardee, Olugbeja Mekunnu (Defender of the Downtrodden), will, by God’s grace, clock a year of his passage by Thursday 29th July, 2021, while a renowned International Rights’ Activist and One of the Political Leaders in the Southwest Region of Nigeria, Otunba Jumoke Ogunkeyede (JMK) will be bidding her caring mother, Madam Comfort Ogunkeyede, aged 109, farewell, in the first week of August, 2021.

Both events are scheduled as follows:

The Lying – In – State of Madam Comfort Titilade Ogunkeyede who died on December 28, 2020, at her Residence in Ibadan, will take place on Thursday, 5th August, 2021, between 11am to 1pm; Service of Songs, 5pm to 7pm. The Harmony Train musical Entertainment, 7pm till 1am. All at Mama’s Residence, 60, Adekola Zone D, Iyana Agbala, Olode, Ibadan.

Friday, 6th August, 2021, is Commendation Service at The Cathedral of Saint James The Great, Oke – Bola, Ibadan, by 10am.

Convoy leaves Ibadan to Ilase – Ijesa, by 11: 30am as enough Buses will be available for the trips to and from Osun State.

We therefore direct the Representatives of the Progressive Youth and Student Organisations across the Yorubaland and beyond to attend these two great events according to the above schedules.