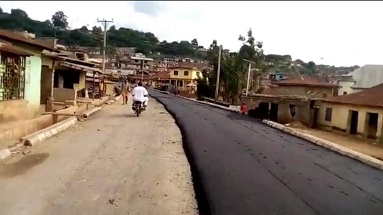 The Kogi State government has promised to continue to embark on projects that will attract more development into the state. The State Commissioner for Works and Housing, Engr. Abubakar Ohere gave the assurance on Tuesday while inspecting the laying of asphalt on the ongoing reconstruction of Ahogede – Idozumi road.

He said that with ongoing construction, the road is now witnessing the laying of asphalt to improve the quality of the job.

“The road as it is, once completed will stand the test of time with it’s gradual completion, while people living within the axis will enjoy the positive economic development, which the road will bring back to them.

Engr. Ohere added that the road is being constructed in compliance with His Excellency, Gov. Yahaya Bello’s directives, “The materials being use must be of high quality standard in order to enable the road stands the test of time.”

“For the past few years in Kogi State, what the people are witnessing now in terms of development has not occurred in the history of road construction in the state.”

The Commissioner, while pin-pointing the importance of infrastructural development as a means of attracting more people into the state to accelerate the economic growth.

“The current administration under the leadership of His Excellency, will continue to rebranding the entire state through his economic and infrastructural development plan.”

He express satisfaction with the quality of the road and the commitment of the contractors handling the project to meet up with date line, noted that the project had reached an appreciable stage, reiterating Governor Bello administration’s determination at ensuring that all ongoing projects were completed in the shortest possible time.