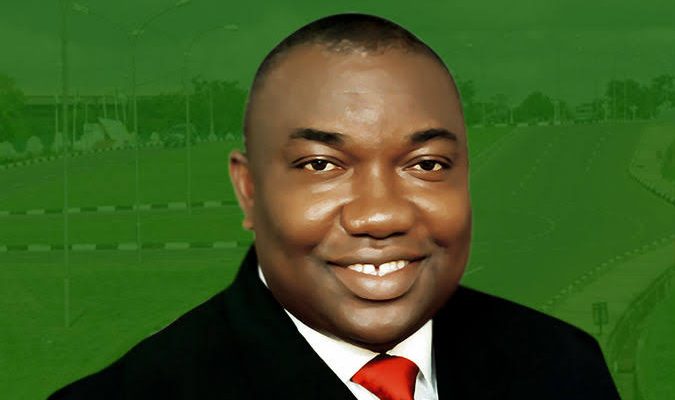 …Condemns Attack on Commissioner By Gunmen

Human Rights Writers Association Of Nigeria (HURIWA) has said, “The wheel of constitutional democracy is in full throttle just as grass root awareness for good governance standards and values is the heart and mind that sustains viable democracy”, saying “these virtues and values have skyrocketed in Enugu State, the erstwhile Easyern regional capital since the current administration of governor Ifeanyi Ugwuanyi  came on board about seven years ago.”

The prominent civil rights advocacy body in a joint statement signed by its National Coordinator, Comrade Emmanuel Onwubiko and the National Media Affairs Director, Miss Zainab Yusuf recommended what HURIWA described as the ‘Ifeanyi Ugwuanyi democracy model’ and his administration’s zeal for consistent local government elections as currently practiced in Enugu State to be replicated in the 36 states of the Federation and the Federal Capital Territory.

HURIWA also urged the governments of the South East of Nigerian States to borrow a leaf on good governance and the ‘live and let live’ mantra of governor Ifeanyi Ugwuanyi as their leadership model so as to eradicate the heightening situation of youths restiveness and insecurity in the Igbo speaking region of Nigeria.

According to HURIWA, it was satisfying to see the governor of Enugu, his commissioners, and all elected political office holders and the appointees embarking on massive but methodical, systematic and seamless door-to-door, and market-to-market Campaigns, mingling, interacting and feeling the pulse, hope and dreams of rural dwellers on the practical concepts of evolutionary development directly from the rural dwellers even as HURIWA compared what has happened preparatory to the Enugu council polls to what usually happens in an advanced democracy like Britain just before the British Council polls.

“We are happy that here in Nigerian State of Enugu, we have a political class that believes that legitimacy to exercise political and constitutional authority over the affairs of the citizens emanates from the good people of Nigeria.

“The pragmatic campaigns initiated by Governor Ifeanyi Ugwuanyi for the Council poll coming up on Wednesday 23rd February 2022 is a fantastic demonstration of leadership by example and we perfectly relate this to what obtains in advanced democracies like the USA; UK and Canada whereby the wheel of democracy derives it’s fuel from the electorate.

“This attitudinal and political modus operandi should be sustained and borrowed by other Federation units so we mainstream pragmatic constitutional democracy around the length and breath of Nigeria in the shortest possible time frame”, the group said.

HURIWA recalled that the Enugu State Government on Sunday declared Wednesday, Feb. 23, as a public holiday to facilitate residents’ “fully and active’’ participation in the state’s local government elections. Elections would hold 17 chairmanships and 260 councillorship positions on that day.

HURIWA said the announcement of the holiday was contained in a statement issued by the Special Adviser to Gov. Ifeanyi Ugwuanyi on Information, Mr Steve Oruruo just as he stated during the election period between 8 a.m. and 4 p.m., markets and offices shall be closed and movement of persons and vehicles restricted, except for those on essential duties.

His words: “All residents legally qualified to vote are, therefore, encouraged to go to the polls and cast their ballots.

“The state government, in its unflinching commitment to safeguarding and strengthening democracy, has made requisite arrangements to guarantee a hitch-free process,’’ Oruruo stated.
HURIWA has also relatedly, condemned the report violent attack targeting a Commissioner serving in Enugu whose two police orderlies were killed by gunmen in the neighbouring Anambra State.

The Rights group said there was disquiet in Enugu on Monday as the State Commissioner for Lands, Chidi Aroh, reportedly escaped death by the whiskers as gunmen attacked him and allegedly killed two police orderlies.
It was gathered that the incident happened on Sunday evening when Aroh was returning from the neighbouring Anambra State, where he was said to have attended a meeting on Saturday.

Although the Anambra State Police Command confirmed the incident, it, however, said the whereabouts of the policemen were yet to be known.

Meanwhile, police sources said that the two policemen were killed when the gunmen ambushed the Commissioner.

According to one of the sources, the gunmen reportedly opened fire on his convoy and when the policemen engaged the hoodlums in exchange of gunfire they were killed and their guns taken away.

The source gave the names of the orderlies that were killed as Inspectors David Adabu and one Solomon.

According to the source, “The gunmen ambushed their Hilux van in a community in Anambra, shot and killed the two policemen. The Commissioner was lucky to have escaped in his Jeep because their Hilux van was riddled with bullets.”

HURIWA has charged the heads of security agencies in the South-East geographical zone to harmonise their operations and intelligence gathering capacities and work in unison to pragmatically combat the rising tension in the region and arrests the real perpetrators of violence unleashing blood cuddling violence on the good people of the South East of Nigeria to stem the tide of targeted killings that are on a steady but ugly rise.