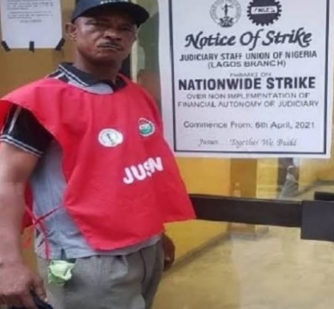 Nigerian courts are set to reopen as judicial workers under the aegis of the Judiciary Staff Union of Nigeria (JUSUN) has suspended its two months old industrial action.

The Judicial workers resolved to suspend the strike on Wednesday after their National Executive Committee meeting held in Abuja.

Deputy President of JUSUN, Emmanuel Abisoye, told newsmen shortly after the meeting, that the union was prevailed upon by the leadership of the National Judicial Council (NJC) to suspend the strike.

The Communiqué of the meeting is being put together to formally declare the strike ended at the time of his report.

Muhammad Auwal Ibrahim, a correspondent with the Abuja Business Reports newspaper have been shortlisted for the first edition of Lekan Otufodunrin journalists award...