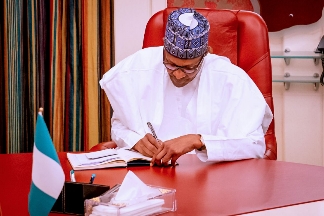 The Federal Executive Council (FEC) approved the establishment of a fire truck maintenance and refurbishment centre to be sited in Katsina at the cost of N13,020,022,803. Katsina is the home state of President Muhammadu Buhari who hails from Daura.

Contents show
1 MTN To Takeover 110 Kilometre Enugu-Onitsha Expressway Construction
1.1 Kindly Share This Story With Friends via:
1.2 Like this:

It was part of the three memoranda presented to the council by the Ministry of Aviation, whose minister, Hadi Sirika, told correspondents that the project is important to the country.

He said: “So, the second memoranda is approval for the award of contracts for the establishment of Fire Truck Maintenance and Refurbishment Center in Katsina. And this is a very critical procurement for us. It is to attend to all the issues we’re having with fire tenders all over the country.

“In the past, past governments used to ship this firefighting equipment back to Europe where they’re manufactured to get them refurbished and bring back at a cost; and of course, it takes time to do so, and export our labour on our foreign exchange.

“In fact, it’s not going to be limited to only firefighting. It will be for heavy-duty vehicles that could be maintained and the intended purpose, as they gain experience, we go into the assembly of those trucks here in Nigeria, similar to what Volkswagen and Peugeot are doing, and eventually, they start to manufacture our own.

“So, the setup will be with the aim to achieve that but the first initial contract is to set it up in such a way that we’ll be doing maintenance on those equipment, and the contract sum was N7,913,949,964.

“The second contract under that is the building itself. The building of the maintenance centre, which is Messrs Ingenious Nigeria Limited at the sum of 3,985,432,685.

“And the other one is the civil works around it, which went to Messrs Glovesly Pro-Project, the cost of 1,120,640,154. 63. This is within our own threshold as a ministry. So, it didn’t come to Council but the two came and they passed on the completion period with this procurement is 12 months”, Sirika said.

Meanwhile, FEC also approved the establishment of a fire truck maintenance and refurbishment centre to be sited in Katsina at the cost of N13,020,022,803 just as it approved the takeover of the construction of the Enugu-Onitsha Expressway by MTN at the cost of over N202.8 billion under the road Infrastructure Tax Credit Scheme.

The takeover of the major South East road followed a memorandum presented by the Ministry of Works and Housing, Babatunde Fashola, to the council presided over by President Muhammadu Buhari at the Presidential Villa, Abuja on Wednesday.

The Minster, after the meeting, explained that it is in line with Executive Order 7 signed by the President in January 2019.

He said the telecommunication giant will complete the dualisation of the 110-kilometre road.