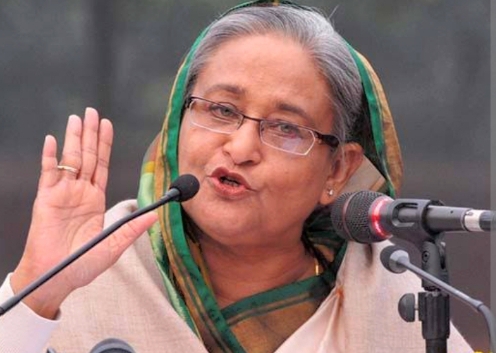 The Prime Minister of Bangladesh, Sheikh Hasina, has reiterated her commitment to to democratic governance, free and fair elections in the country.

The daughter of the founding father and first President of Bangladesh, Bangabandhu Sheikh Mujibur Rahman has been the Prime Minister since January 2009. Her father was assassinated along with her 18 family members in 1975.

She told BBC journalist, Laura Kuenssberg, in an interview aired on Sunday that free and fair elections are held only during the Awami League’s regimes as she always struggled to establish democracy and democratic rights in the country.

The Prime Minister, who is in to join hundreds of thousands to bid farewells to Britain’s longest-serving monarch as she lies in state, spoke about her country’s politics as well as her Bangladesh’s “love” for Queen Elizabeth II in the interview aired on Sunday.

Her host threw questions about concerns over the fairness of the next parliamentary election to be held at the end of 2023 or early 2024.

The UK High Commissioner to Bangladesh Robert Dickson had called for free and fair elections and in her reaction, the Prime Minister noted that military rulers ruled the country for a long time directly or indirectly and overtly or covertly after the assassination.

She said, “Of course, it is my struggle to establish democratic system and free, fair elections.”

Hasina explained that the military rulers in the country formed parties and they never went to the people and asked to vote for them.

In her words, she said, “They used the army, administration, and everything just to remain in power.”

Asked about the allegations of forced disappearance, Hasina said anyone can bring allegations but it needs to be judged how far it is true.

“Many people can place allegations. But you have to judge how far it is true. Before that, no one should make any comment,” she said.

“How many people disappeared in your country and other countries, you can’t judge. In all these issues, I think all information needs to be collected first and then they can accuse (anyone)”, she said.

Reflecting on her memories of Queen Elizabeth II, the Prime Minister observed that the late Queen had “great value” to Bangladesh, a Commonwealth country.

The prime minister praised the Commonwealth, saying no country can go alone and the platform has created opportunities for sharing views and ideas.

“We love the queen. She was so affectionate. Not only that, I am very lucky that she always remembered my name. I have come here to pay respect to her.”

Hasina recalled that her entire family had gone to her father, Bangabandhu Sheikh Mujibur Rahman’s office in 1961 to see Queen Elizabeth II passing through the street outside during her visit to Bangladesh, then East Pakistan.

She said she had met the queen every time she visited the UK after becoming prime minister. The Bangladesh leader attended seven Commonwealth summits and the 2012 Olympic Games.

“She was not only a queen, but a very affectionate motherly personality. Whenever I met her, I felt that”, Hasina said.