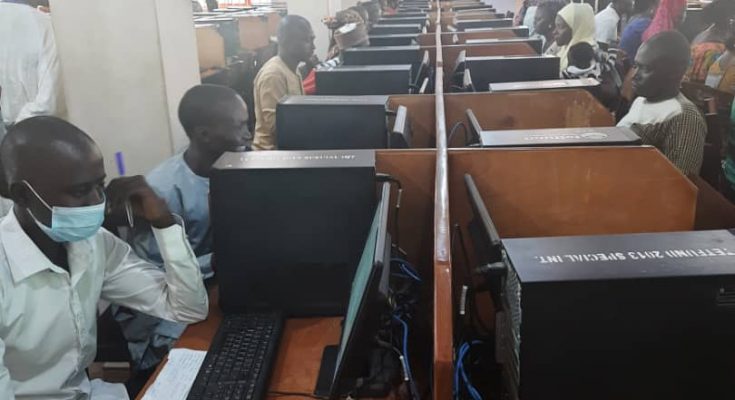 The Gombe State Teachers’ Service Commission (TSC) has commenced aptitude tests for about five thousand graduate applicants to select one thousand successful ones for employment as fresh teachers as approved by Governor Muhammadu Inuwa Yahaya.

According to the Chairperson of the Commission, Mrs. Na’omi Philip Maiguwa, the computer based test ( CBT), which is already ongoing at the Gombe State University, is expected to last for five days (25th-29th July 2022).

According to her, eligible candidates from the 11 local government areas of the state are expected to show the print out of their application slips, Degree and NYSC Certificates as well as letters of LG indigeneship before being admitted into the test rooms while special arrangemens have also been made for physically challenged applicants.

“It would be recalled that the Executive Governor of Gombe State, His Excellency Muhammadu Inuwa Yahaya (Dan Maje Gombe), had in April this year authorised the Gombe State Teachers’ Service Commission to continue with the recruitment process which started in January 2022, of 1000 fresh teachers and the transfer from SUBEB 288 teachers whose services are urgently needed in the State senior secondary schools and technical colleges.

“The Commission had since June completed the transfer of the teachers from SUBEB to the Ministry of Education to allow for concentration on the recruitment of the 1000 fresh teachers.

“It is delightful to note that His Excellency in his magnanimity and foresight had early July given the TSC a marching order to finalize the recruitment process of the 1000 fresh teachers already started”, she said.

Mrs Maiguwa, then, expressed optimism that before the beginning of the new academic year, both the transfered teachers and the newly recruited ones (about 13000) would have been rightfully placed in the State’s senior secondary schools and technical colleges.

She commended Governor Muhammadu Inuwa Yahaya for giving priority to education and for his determination to turn around the sector , noting that “there is no part of the school component now left out by the governor.

She therefore called on all stakeholders in the education sector and the citizenry in general to rally round him and give him maximum support to continue to give education its befitting status in Gombe State.