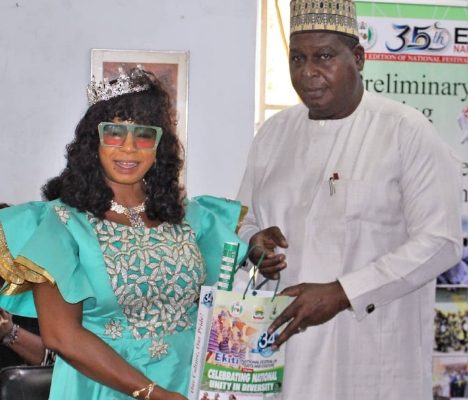 NCAC To Train Forty And Fabulous Women To Become Millionaires

The National Council for Arts and Culture (NCAC) has finalised arrangements to train participants of the Forty and Fabulous; a reality TV show on ways to become millionaires.

The Director General of the Council, Otunba Olusegun Runsewe made this known in his office when the producer and house mates of the reality TV show visited him in his office.

Otunba Runsewe who thanked the organisers and participants of the reality TV show said one of his cardinal working principle was to empower women and youths so they can become self reliant and contribute their quota to the socio economic development of the nation.

Runsewe maintained that he was proud to associate with the Forty and Fabulous Brand for their relentless eforts in upholding and projecting the dignity of womanhood despite the overbearing Western influence that has pervaded the fabrics of our cultural values as a nation.

“I am happy that Nnenna has a lofty dream of projecting who a true Nigerian woman should be. This brand deserves huge support from all of us”. Runsewe reiterated.

The Culture Icon also re- echoed the need for the Forty and and Fabulous Brand to be properly nautured as it will put the Nigerian women in proper perspective in line with our rich cultural heritage and values.

Runsewe therefore pledged Council’s support to the Forty and Fabulous Brand by training the participants of the TV show in various skill acquisition areas like bead making, make up , waste to wealth, to mention but a few. This he assured will create wealth and serve as a window for the participants to become millionaires at the end of the TV show.

Said he “we will use one week to train all the participants and present certificates to them in at the end of their training. The arts and culture is vast and can accommodate everyone with little capital to start up a business”.

Speaking earlier, the founder and producer of the Forty and Fabulous reality TV show, Nnenna Jolly said they were in the Council to thank the Director General for his fatherly role in making the inaugural edition of the TV show a reality.

She stated that women have in recent times owing to overwhelming Western influence been projected wrongly adding that nudity and other negatice dilinquenses which is alien to our culture have also been given prominence.

Nnenna revealed they the need to change the narrative and project women in the right perspective was the driving force behind the reality TV show.

According to Nnenna, the participants in the TV show have been trained by the Small and Medium Enterprises Development Agency of Nigeria (SMEDAN) on wealth creation while Studio 24 have also trained the housemates on photography.

She therefore called on well meaning Nigerian women to identify with the brand as it hopes to provide the much needed platform for women To empower themselves in the creative industry.