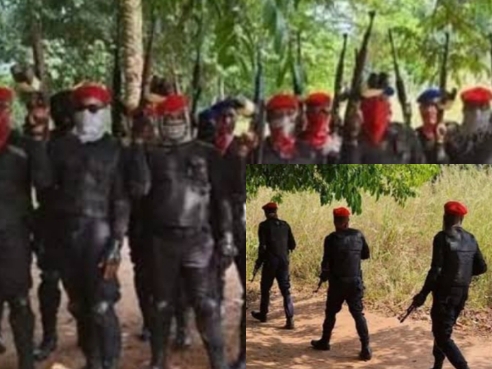 Indeed the HUMAN RIGHTS WRITERS ASSOCIATION OF NIGERIA (HURIWA) said were it not that President Muhammadu Buhari tolerates serial dereliction of duties and clear intelligence failures by his security chiefs, the Inspector General of Police who is in charge of the primary internal security and law enforcement institution would have been sacked for his spectacular failures.

HURIWA, in a statement on Monday by its National Coordinator, Comrade Emmanuel Onwubiko, lamented that it is saddening that security forces including the Nigeria Police Force, the Nigerian Army, the Department of State Services, and other intelligence and security agencies have failed to halt the barbaric killings in the South-East and demystify the “unknown gunmen” phenomenon.

The list of the horrific killings by the unknown gunmen are endless but fresh in the serial murder is the killing of Sule Mathew, a first-class graduate of the Information and Media Studies, Bayero University Kano.

Mathew was killed this February by gunmen along with some passengers he was travelling with at Ekwulobia, a town in Anambra.

In May 2021, the same unknown gunmen shot dead a former presidential aide, Ahmed Gulak, on his way to the Sam Mbakwe International Cargo airport in Imo State.

In September 2021, the rampaging gunmen also brutally murdered Dr. Chike Akunyili, widower of the late Director-General of the National Agency for Food and Drug Administration and Control, Dora Akunyili, in Anambra State.

Commenting on the serial murders, HURIWA National Coordinator, Emmanuel Onwubiko, said it is disturbing that the President is comfortable with the descent of the South-East into another North-East ravaged by insurgency.

He said, “It is alarming that despite the inability and failure of the security forces especially police and DSS to conclusively prove the exact identities of these mass murderers, the President is very comfortable working with heads of these institutions who clearly have demonstrated a classical failure of their key mandate.

“Also, there is for now no known empirical evidence to support the empty and unintelligent claims by the commissioners of Police in the South-East that the Indigenous People of Biafra is behind the killings.

“Finger pointing is needless and of no value to any Nigerians. Security agents must not allow the killings to continue. The South-East is gradually emaciating economically and in tourism due to the insecurity created by the “unknown gunmen” The security agents must quit rhetoric and apprehend those responsible, regardless of who they are. There must be no cover ups and sacred cows.

“Incompetent heads of security agencies who can’t deliver on a simple mandate of his job should be fired immediately. The President must not sit idly with underperforming commanders at security meetings.

“Security agents and their bosses should sit up and deploy intelligence led  operations to uncover the kingpins of the unknown gunmen rather than the current modus operandi of the use of brute force and extrajudicial killings of mostly innocent Igbo youths and the destruction of towns and villages by security forces any time their personnel are killed by these so called unknown gunmen or hoodlums.”

Like Loading...
Previous PostNot Too Young To Perform's National Coordinator Says Youth Takeover Leadership is Possible Next PostHow You're Sabotaging 2023 Polls Amid Your Call For Western Powers Action Against Coups - HURIWA to Buhari