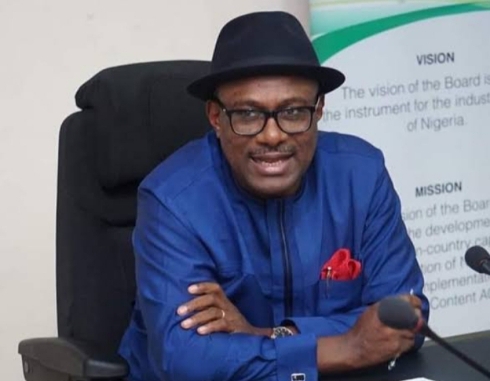 Conference of Nigeria Political Parties (CNPP) has said that its 21-day ultimatum, in collaboration with a coalition of civil society organisations (CSOs), demanding that the Executive Secretary of the Nigerian Content Development and Monitoring Board (NCDMB), Engr. Simbi Kesiye Wabote, steps aside for a thorough investigation of allegations of corruption against him stands.

The CNPP in a statement signed by its Secretary General, Chief Willy Ezugwu, while reacting to a fake news commending the NCDMB boss, urged members of the public to disregard the media report published by some online media platforms, saying its considering legal options against publishers of the fake report.

The report had claimed that “the National Secretary of the Conference of Nigerian Political Parties (CNPP), Chief Willy Ezeogu, has commended the Executive Secretary of the Nigerian Content Development and Monitoring Board (NCDMB) over his exceptional performance in office.”

The publication also claimed that “Ezeogu also dissociated himself from the call on the Executive Secretary of the Nigerian Content Development and Monitoring Board (NCDMB) to step aside for a thorough investigation of allegations of corruption against him within 21 days.”

“However, in its reaction, the CNPP described the report as fake news which was poorly cooked and packaged in desperate move to misinform the public.

“Secondly, the claim that the CNPP scribe “was misinformed about the leadership of the Executive Secretary at the NCDMB and his positive impacts on the country’s oil and gas sector” is far from the truth.

“In this light, the CNPP is weighing legal options against media organisations which published such fake reports attributed to the umbrella body of all registered political parties and political associations in Nigeria.

“The issues CNPP and a coalition of civil society organisations (CSOs) raised had nothing to do with whatever achievements or otherwise of Engr. Simbi Kesiye Wabote as Executive Secretary of NCDMB.

“The NCDMB boss has obviously taken his alleged desperation to cover up his track and obstruct the course of justice too far by this latest sponsored fake news.

“As a matter of fact, in a statement signed by the National Coordinator of the Human Rights Writers Association of Nigeria (HURIWA), Comrade Emmanuel Onwubiko last Thursday, the organisation had while standing by the CNPP’s call on Engr. Wabote to step aside for thorough investigation, queried the source of funding for his legal action in the court in United States, which is usually very expensive and paid in dollars.

“We strongly reiterate our demand that Engr. Wabote should step down to allow for open investigation into corruption and perjury allegations against him by a Nigerian journalist based in the United States”, the umbrella body of all registered political parties and political associations in the country said.

The CNPP then recalled that recently the media reported that Mr. Simbi Kesiye Wabote, Executive Secretary, Nigerian Content Development and Monitoring Board (NCDMB) allegedly risks contempt sanction and a possible jail for alleged perjury and lying on oath in a libel case he instituted against the US base Nigerian journalist, Jackson Ude.

The libel suit against the journalist was instituted in a United States District Court, Eastern District of Pennsylvania.

The court had on Tuesday, December 21, 2021 ordered Wabote, to provide “full and complete responses to defendant’s interrogatories”, as the court was not satisfied with earlier responses provided by Wabote and his counsel.

But in his reaction to the responses by Wabote to the interrogatories, counsel for Defendant (Ude) wrote to the court demanding sanction for “Plaintiff (Wabote) and his Attorneys for committing fraud on the court, for perjury and for acting in subornation of perjury in this case.”

Alternatively, the Defendant’s lawyer requested “for an order of this court mandating the Plaintiff and his attorneys to appear and show cause why they should not be held in contempt and/or sanctioned by this court.

Part of the letter as quoted in the media stated thus:

“I am the counsel for the Defendant in this case. It is very painful that the Defendant is making this request in this case. But this has become necessary because Plaintiff and his Attorneys, Michael Cilento and David D. Lin, have deliberately and remorselessly committed fraud on this court with the knowing intention of derailing the course of justice and torpedoing Defendant’s access to justice in this case. The Plaintiff has consistently perjured himself and has lied on oath in his discovery responses; while Plaintiff’s Attorneys have consistently encouraged him and have acted in subornation of perjury, to the prejudice of the Defendant and in violation of Defendant’s due processes of law rights. Defendant hereby asks for deterrent sanctions against them.

“Defendant respectfully asks the Court to impose the necessary sanctions, or in the alternative, for an order mandating the Plaintiff and his Attorneys, Michael Cilento and David D. Lin, to appear and show cause why they should not be sanctioned by this court for fraud on the court, for committing perjury, and for acting in subornation of perjury.

“Plaintiff deliberately perjured himself and lied on oath in his discovery [Interrogatory] responses in this case. Plaintiff’s Attorneys are fully aware of plaintiff’s conduct. But they acted to encourage Plaintiff, covered up the violations and acted in subornation of perjury. These conducts have prejudiced Defendant’s access to justice, and has frustrated Defendant’s ability to honestly defend himself in this case.

“Defendant’s Interrogatory #11 to the Plaintiff requested Plaintiff to: Identify and clearly state all and every bank, no matter where located, where you have maintained any bank account from 2010 to the present, whether still in operation or closed. See Exhibit A.

“In the Plaintiff’s response to this Interrogatory #11, Plaintiff lied on oath and deliberately refused to disclose all his bank accounts. See Exhibit A, para 11. Plaintiff signed this document on oath and under the pains and penalties of perjury.

“On or about December 19, 2021, Defendant received the copy of a Petition written by Nigeria’s Transparency and Accountability against the Plaintiff, Wabote. Please see Exhibit B. The said petition was directed to the Nigerian Code of Conduct Bureau.

Wabote and his Attorneys had in response to Interrogatory #11 admitted that the Plaintiff had bank accounts with Bank of America, HSBC Dubai, First Bank Nigeria, Standard Chartered Bank Nigeria, SunTrust Bank Nigeria without listing their account numbers.

The letter continues: “Additionally, in #1 of Defendant’s second set of Interrogatories to the Plaintiff, Defendant specifically asked Plaintiff to: Please clearly, fully and specifically state your monthly income (from whatever source) and expenses, and stating clearly and specifically the sources of your stated income, from 2019 to the present.

“But notwithstanding the fact that Plaintiff secretly runs a private registered corporation “with interest in landing state contracts,” as revealed by and in Exhibit B, Plaintiff again lied on oath and failed to reveal this company and the illicit flow of funds, in his response to this Interrogatory #1. Please see Exhibit C. This deception was also made on oath. Plaintiff’s said corporation is TEE and T Concepts Nigeria Limited, incorporated in Yenagoa, Nigeria with Registration Number 419331.

“The actions of the Plaintiff and his Attorneys were calculated to interfere with this court’s ability to impartially adjudicate this case by improperly influencing this court and/or unfairly hampering the presentation of the Defendant’s defenses in this case.

“A ‘fraud on the court’ occurs where it can be demonstrated, clearly and convincingly, that a party has sentiently set in motion some unconscionable scheme calculated to interfere with the judicial system’s ability impartially to adjudicate a matter by improperly influencing the trier or unfairly hampering the presentation of the opposing party’s claim or defense.” Rockdale Mgmt. Co. v. Shawmut Bank, N.A., 418 Mass. At 598, quoting from Aoude v. Mobil Oil Corp., 892 F.2d 1115, 1118 (1st Cir. 1989).

“Truth needs no disguise. Hazel Atlas Glass Co. v. Hartford-Empire Co., 322 U.S. 238247 (1944). An effective judicial system depends on the honesty and integrity of lawyers who appear in their tribunals. Matter of Finnerty, Thomas E., 418 Mass. 821, 829. The Plaintiff and his Attorneys are not forthright. They have soiled the integrity of the legal system. Navarro-Ayala v. Nunez, 968 F.2d 1421, 1426 (1st Cir. 1992) (“Courts cannot function if lawyers and litigants are not forthright.”). It is part of a lawyer’s overall obligation to the court, and to the judicial system, to help that system function properly to achieve the just resolution of controversies; and which is “meant, in some small degree, to enlist the bar in the enterprise of administering the law, thereby making it more difficult for the strong or wealthy, to use the very costs of the legal system to undermine its basic objectives.” Unanue-Casal v. Unanue-Casal, 898 F.2d 839, 842 (1st Cir. 1990). Defendant’s request for sanctions should be allowed in the interest of justice.

“Defendant asks for sanctions against the Plaintiff and his Attorneys pursuant the inherent jurisdiction of this court to do justice, and pursuant to Fed.R.Civ.P. 37(b)(2)(A)(i)-(vi) for the Plaintiff’s truncation of the discovery process and the commission of frauds on the court.

“Alternatively, Defendant asks for an order mandating the Plaintiff and his Attorneys to appear and show cause why they should not be held in contempt of court, and/or be sanctioned severely. Tampering with the administration of justice in the manner exhibited herein involves more than an injury to a single litigant. Hazel-Atlas, at 246. Additionally, pursuant to 37(b)(2)(C), Defendant requests that the Plaintiff and his Attorneys be ordered to pay for the Defendant’s attorneys’ fees and expenses.”

Like Loading...
Previous Post‘SIYASAR YANCI’ Launches in Minna, Set to cover Nigeria - Sai Baba Next PostExport And Sell In USA Assures Nigerian Exporters A Stress Free Exportation To The USA