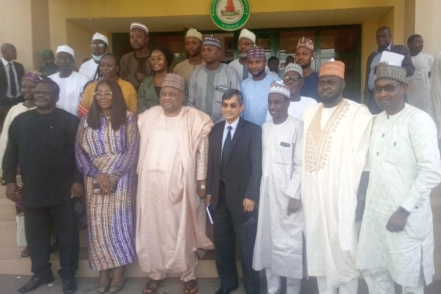 On behalf of the Katsina State, the state Deputy Governor Alhaji Mannir Yakubu has received an interim report on the state Economic and Investment Summit and Ground breaking ceremony of Funtua Integrated Textile and Garment Park to be hold in the state.

The Director General, Katsina Investment Promotion Agency Alhaji Ibrahim Tukur Jikamshi led members of the Committee in the presentation of the report at the Conference Hall of the Deputy Governor.

Receiving the report from the committee, katsina state deputy governor Alhaji Mannir Yakubu said this year’s Economic and Investment Summit will be different from the previous one as it will focus on the two major projects.

Those according to him are the Funtua Integrated Textile and Garment Park and Green Economic Zone along Jibia road, Katsina.

Alhaji Ibrahim Tukur jikamshi also reviewed the agenda of the Summit to be hold from Day one to the last Day of the occasion as well as funding arrangements for the programme.

About two hundred million is expected to be spent for the conduct of the Summit.
Among the development partners for the Summit are the United Nation Industrial Development Organisation, Federal Ministry of Industry Trade and Investment and Nigeria Export Processing Zones Authority.