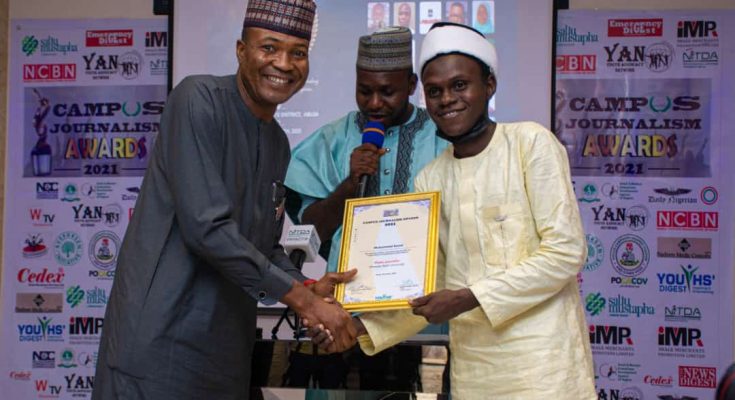 Muhammad Auwal Ibrahim, a multiple award-winning journalist, fellow AIJC 2020, and a reporter with Abuja Business Reports has emerged as the winner of the photo journalist category of the year in the 2021 campus journalists award.

This was disclosed during the annual gathering of outstanding campus journalists in Nigeria held at Hotel 2020, Abuja, Saturday, December 11, 2021.

Recall that we have reported to you that the he was shortlisted for the second time in a row in both 2020 and 2021.

He won the award for his story funded by Premium Times Centre For Investigative Journalism (PTCIJ).

Muhammad Auwal while speaking with our reporter said that he is so excited and thanked the Almighty Allah for sparing his life to achieve such feat.

“Alhamdu lilLah, I became the first person wearing a turban to be awarded at Youths Digest Journalism Awards #CJA2021. I beat Adewale Abdullahi from Obafemi Awolowo University (OAU) to win this award. I am happy that I made this after two attempts.” said Auwal.

“Receiving my award from Mal. Jibrin Baba Ndace, Defence Editor, Blueprint Newspaper and former Chief Press Secretary to Niger State Governor at Hotel 2020, Abuja on Saturday’s evening, December, 11 with a smile has made my day.”

“When the MC of the event, Abdullahi O Haruna Haruspice announced me as the winner of my category, I knew he was referring to me.

“However, he added ‘Malam’ before Muhammad Auwal and I was wondering whether a Malam was shortlisted in my category. Guests were busy clapping as they were looking to see where their Malam will appear as I mount the stage. Incidentally, I was wearing a turban.”

“The presenter of the award too, Mal. Jibrin Baba also mentioned the ‘Malam’ first and I was looking at the award to see whether it was included there. But it wasn’t. Alhamdu lilLah, it is good to receive good recommendation. Even one member of the high table was congratulating me.” Wait for the complete travelogue here.”

“As I said, this win is for North East. This is the only award I was present in person to receive it.”

Other 13 students from various campuses such as Lagos State University, Obafemi Awolowo University, University of Nigeria, Nsukka, Ladoke Akintola University of Technology, amongst others were also awarded at the event.

Also, the Director General of National Information Technology Development Agency (NITDA) and the publisher of Blueprint Newspaper were also awarded at the event.