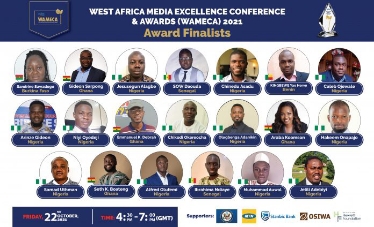 Muhammad Auwal Ibrahim, an award-winning journalist, fellow AIJC2020 and a freelance reporter with Edutorial has made the shortlist of the annual prestigious West African Media Excellence Conference and Awards (WAMECA) 2021.

Based on the information at our disposal, Auwal made history again as he became the first Abuja Business Reports journalist that ever made the shortlist since the inception of the awards, five years back.

The award-winning journalist has within two years demonstrated excellent performance in the field of journalism.

He was announced as a finalist along with 20 others in a statement released by the Media Foundation for West Africa on October 6, 2021 in Accra, Ghana.

The statement added that the finalists were selected from five west African countries after a thorough judging process by a five-member jury.

“The 2021 West Africa Media Excellence Awards received 711 entries from 14 countries in West Africa. The five-member jury after a thorough review of the entries shortlisted 21 finalists from five countries.” said the MFWA.

In the coming days, Auwal will be representing Nigeria in the annual WAMECA event in Accra, Ghana, along with his colleagues.

“This year’s event, the 5th edition, will be held on Friday, October 22, at the Alisa Hotel, Accra, Ghana and will be graced by media experts, high-level personalities and delegates from sub-regional bodies and civil society groups.”

Speaking after making the shortlist, Auwal expressed his happiness, “I am super excited to learn this. Alhamdu lilLah, this shows nothing but the fairness, balance and justice of my reports. May Allah help us.“

Recall that in 2020, he was selected as a fellow of African Investigative Journalism Conference (AIJC20) hosted by the University of Witwatersrand, Johannesburg, South Africa, Wits Journalism and also shortlisted for the annual Youth Digest Journalism Awards 2020.

Not only that, he has won the Inaugural Lekan Otufodunrin Journalists Awards 2021 recently and got nominated for another Global fellowship titled ‘Climate Tracker COP26’.

Now, he is the youngest among all the finalists.

Like Loading...
Previous PostIGP Speaks on Reported Return of SARS Next PostKano - Katsina Boundary One of the Most Peaceful Interstate Boundaries - Mannir Yakubu