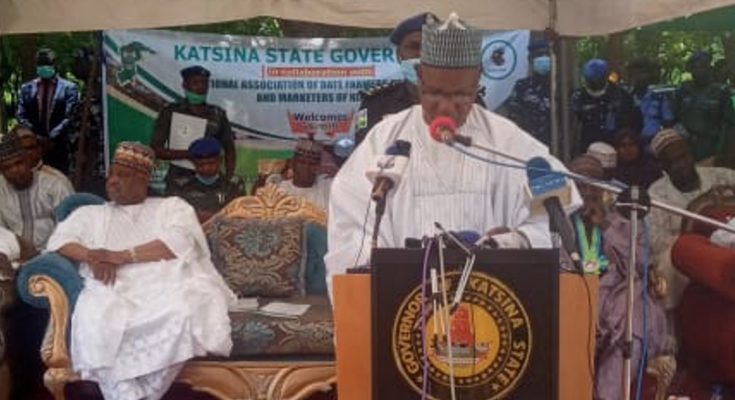 Katsina State Government has said that with the launching of 600 hectares date palm planting campaign in the state, Katsina’s Agricultural Restoration Project is on course.

Governor Aminu Bello Masari stated this at the launching of the National Date palm planting of 600 hectares campaign in the state organized by the National Association of Date Palm Farmers Processors and Marketers of Nigeria (NADAFPAM) in collaboration with the state government.

Governor Masari further explained that the 600 hectares targeted across the state will ensure the participation of small and medium scale farmers who constitute 80% of the state farming population.

He said that there is need for development partners to come in for development along with their value chain especially the central bank (CBN)   through its anchor borrower programme in which loan could be secured with a 3years repayment period and above.

He said his administration Will  deploy modern trend of precision agriculture for increased productivity and continue to support farmers to enable them have access to improved farming techniques and agricultural inputs as well as enhance surplus production in order to close the gaps of food shortage created by banditry in the front line local government areas.

The Deputy Governor said 41 youths from the 34 local government have being selected to undergo a train-the-trainers (ToT) workshop on the establishment and management of date palm and a step down training will be conducted to other youth in the state.

He said that the National chapter of NADAFPAM will provide assorted date palm seedlings, protective clothing and manure amounting to the sum of N36.7 million.

Mannir Yakubu disclosed that Katsina State Government through the ministry of Agriculture and Natural Resources in collaboration with national and international partners has lined up series of activities and programme that are farmers driven for the development of agriculture in the state. This is in tandem with the state Agricultural restoration project aimed at catapulting the state Agriculture to a higher level.