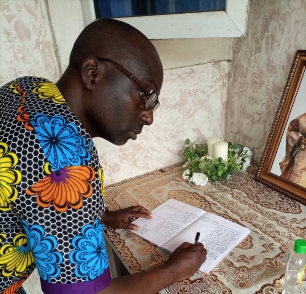 After their crucial meetings with the bereaved families across the South West states, every arrangement has been concluded by the leadership of the Grand Council of Yoruba Youths to be in attendance at various locations where the bodies of the three prominent Nigerians but short lived personalities that passed on recently will be laid to rest.

During the week at Chief Gani Fawehinmi’s House, GRA, Ikeja area of Lagos State, members of the Grand Council of Yoruba Youths merged with the vibrant Igbo Youths Group and both were led by Comrade AWA Bamiji and his close Comrade friend, most travelled Youth Leader in Nigeria, the Nigerian Youth Ambassador at the United Nations and now Traditional Ruler in Imo State, who came down from Imo State, for the purpose, Eze Goodluck Obi, were received by the Noble family of Fawehinmi.

Today, Saturday, 21 August, 2021, the Actors Guild of Nigeria (AGN), an Umbrella Union that regulates and represents the affairs of film Actors in Nigeria and Abroad, is organising “a Night of Tributes” in honour of the Late iconic Actress, Chief Racheal Etabuno Oniga, at Blue Roof Top, LTV8 Premises, Lateef Jakande Road, Agidingbi, By Cocola B/Stop, Ikeja, Lagos State, at 3pm, “with dress code: All White.”

The Timetables for the funerals as released by the Grand Council of Yoruba Youths are as follows:

Next week August 26 – 27 have been set aside for the burial of a Veteran Actress, Racheal Oniga, who passed on at age of 64, in Lagos State; while August 25 – 27 were slated for the funeral ceremony, at Ibadan, of a foremost Leader in Disability Community and former Senior Special Assistant to the Late Governor Abiola Ajimobi of Oyo State, who successfully, took the Disability struggles to the United Nations Headquarters, at the peak of his Disability evangelism, shortly before his death, Prince Paul Adelabu, who died 3 days to his 60th Birthday anniversary. The funeral event was earlier slated to be held at Disability Centre, Moniya, Ibadan.

Wednesday is the Commendation Programme at Agodi Secretariat, Ibadan, Oyo State, 11am.

The youths disclosed that COVID-19 Protocols will be strictly adhered to throughout these important events and prayed, “May God rest their souls.”