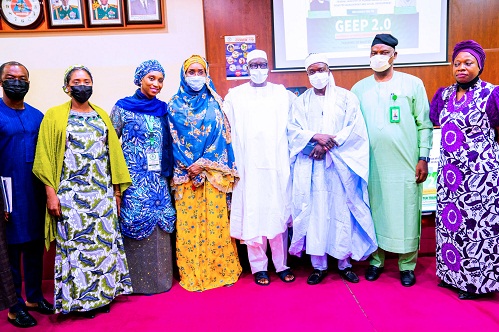 The Federal Government has signed a partnership with the National Orientation Agency (NOA) as one of its key partners in its quest to raise awareness for its National Social Investment Programmes.

The announcement was made by the Minister of Humanitarian Affairs, Disaster Management and Social Development, Sadiya Umar Farouq in Abuja at the weekend.

At the opening of the training for Master Trainers on Government Enterprise and Empowerment Programme – GEEP 2.0, the Minister said the move became necessary to raise awareness to positively change attitudes, values, and behaviors.

“I must say the agency has shown outstanding dedication towards effective implementation of the NSIP programmes. It is in this vein that the FMHADMSD entered into partnership with NOA to appoint the Community Orientation and Mobilization officers as GEEP Desk Officers in all the 774 local government local areas across the country”.

With NOA identified as one of the organs of Government agencies largely spread across all states and Local Governments with the capacity to adequately engage, mobilize and sensitize the general public on Government programmes and policies, it became imperative that the agency was brought in as a strategic partner.

To this end, the ministry in conjunction with NOA have appointed Community Orientation and Mobilization officers to be trained as GEEP Local Government Desk Officers in all the 774 local government levels areas across the 36 states and the FCT.

These officers will sensitize communities on the GEEP programmes, register interested beneficiaries of TraderMoni, MarketMoni and FarmerMoni.

She thanked the NSIP team and staff of the Ministry for their dedication and hard work as well as other partners towards the fight the fight against poverty.

The two-day intensive interactive training which ended on Saturday in Abuja provided an understanding and insight to the processes, drivers, threats and opportunities associated with core GEEP activities especially the newly introduced structure of top-bottom representation, from the Federal through State and Local Government levels respectively. It also informed them on the roles and responsibilities of the COMO’s, how to register and enlighten the target beneficiaries, how to access the GEEP loans in furtherance to helping to eradicate poverty and generate employment throughout the Federal Republic of Nigeria.