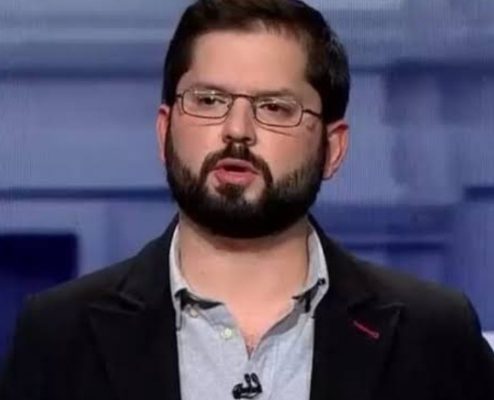 National Coordinator of South-East APC Presidency Project 2023, a project of South-East APC Integrity Group, Chinedu Jideofo-Ogbuagu has said Nigerian youths should be challenged by the election of 35-year-old Gabriel Boric as President of Chile.

Dr. Jideofo-Ogbuagu who reacted to the positive development said, “I have extensively shared news story of election of 35-year-old Gabriel Boric as President of Chile in the hope that Nigerian youths would be challenged by it and stop thinking that a presidential aspirant must be old or extremely rich or occupying a big office or an ex-this, ex-that.

“If as a young man in my teens and twenty’s in 1970s and 1980s I didn’t think that way, why are Nigerian youths in their 30s, 40s and 50s of today thinking that they have to be older than 60, as rich as Dangote, former or current high political office holders to aspire to Nigeria’s Presidency?”, he asked.

He maintained that “By age of 30 in 1988, in addition to obtaining four degrees that I applied intuitively to leadership of Nigeria (the only political office that I truly ever wanted to hold, my bid for Enugu West Senatorial Seat in 1999 and 2001 being to hopefully become Senate President and to fully acclimatise in Nigerian politics after almost 20 years abroad before declaring for President of Nigeria), I had self-trained myself to become President of Nigeria and was ready to return to Nigeria to contest for that by the age of 30.

“But the military had blocked the democratic paths to political leadership and I was not willing to return to Nigeria and seek for appointment by the military governments.

“In 1990, at age of 32 and now almost getting frustrated by the military blockage of democratic political engagement back home, I founded Nigeria Development Movement (NIDEMO) while still residing in Britain, with which I wanted to return to Nigeria to participate in the Gen. Ibrahim Babangida transition to democracy.

“But being a columnist in West Africa Magazine and with other Establishment connections, I knew that IBB was not sincerely preparing to hand over to elected civilians, so I stayed back in Britain”, he recalled.

Dr. Jideofo-Ogbuagu added that “Gen Sani Abacha started his own insincere transition to democratic rule and I stayed back with my party, which I meanwhile had deployed – since 1990 – to organising Nigerians for community development in Britain.

“It was Gen Abdulsalam Abubakar’s transition programme and the soothing assuring words of Gen Ishaya Bamaiyi to me that faithful day at Dorchester Hotel, London in August 1998, that encouraged me to return to Nigeria on 12th October 1998 with NIDEMO, now changed to National Development Party of Nigeria (NDPN) and registered by INEC before I returned to Nigeria.

“In 1998, I was 40 and feeling that military governments had wasted my years since 1988, and that feeling of much time wasted since 1988 accounted for the mistakes I made in 1998-2003 (Long stories of a man in a hurry and not prepared to waste any more time).

“By the time I finally declared for President of Nigeria in 2002, I was 44 – rather late to me but young to people who did not know what I had planned for myself since secondary school years: to lead a group of young Nigerian men and women to transform Nigeria to a first-world country within the shortest possible number of years.

“I did not win ANPP presidential primary in 2003 and Gen Muhammadu Buhari who won it and who I assisted in his 2003 presidential campaign didn’t win the general presidential election that year either, but presidential aspiration and the experience that came with it was well worth the tens of millions of naira it cost me and the bankruptcy that ensued.

“Would I be so willing now to take the risks I took in 1998-2003? Maybe not. Which is why I sympathize with men of my generation who are over-cautious in declaring for President of Nigeria 2023.

“Even those of them who have billions of naira stashed away won’t gamble as little as N500 million of that haul to launch themselves into the 2023 presidential race. It is in the nature of most old people to be conservative.

“But where are the Gabriel Boric of Nigeria. They asked for Not-Too-Young-To-Run legislation and had minimum age for presidential contest reduced to 35 years.

“Since then, the Nigerian youths would rather drink themselves to stupor or buy expensive phone gadgets and fast cars than put their money where their mouths are in respect of vying for leadership”, he said.

On how to raise funds for elections, he said, “Yet, if every young Nigerian of between 25 and 50 will spare just N10,000 of the money each of them wastes in beer parlours every week, they will raise the war-chest to put one of them in Aso Rock Presidential Villa, Abuja.

“At my current age of 63, I have since January 2020 spent my retirement money in creating a platform for any credible young man to become president of Nigeria in 2023 on APC platform, something that no one had done for me by 2003.

“But none of them is prepared to step forward as some of us did 20 years earlier.

“The same young people – when they are not arguing childishly, playing pool or watching BBN – are waiting on same old ones (including men much older than me) to work for on their “recycled” or perennial presidential aspirations! Very agonizing and disappointing.

“If 2023 Presidency falls into the hands of another geriatric, the youths of Nigeria have only themselves to blame for yet again postponing takeoff of rapid progress of Nigeria in a positive direction”, Dr. Jideofo-Ogbuagu warned.