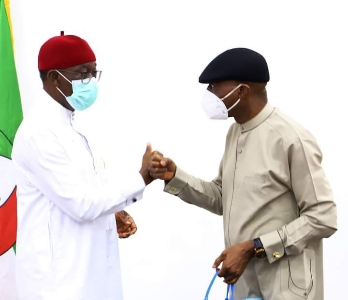 In a statement signed by his Chief Press Secretary, Mr Olisa Ifeajika, in Asaba, the governor lauded Manager for his sterling and patriotic contributions to the successes recorded by the Peoples Democratic Party (PDP) and successive administrations in the state.

He described Manager, a fifth-term Senator, as a dependable political ally and a leader of great value, adding that he was a patriotic Nigerian, gentleman par excellence, a team player and God-fearing leader.

“As pioneer chairman of our great party in Delta, you worked very hard to ensure that PDP had a grandiose foundation, towering like a colossus, which culminated in our sustained winning streak over the years.

“In the last 18 years of representing your people as their lawmaker at the big stage, you have continued to contribute immensely to their growth and development and I urge you to remain steadfast in your quest to make life more meaningful for them.

“On behalf of my family, the government and people of Delta, I wish to felicitate with the pioneer Chairman of our party in the state, Distinguished Senator James Ebiowou Manager, on the occasion of his 61st birth anniversary.

“At 61, you have made remarkable and invaluable contributions to national development and your statesmanship which is on display always is indeed, gratifying.

“As one of the most ranking senators of the Federal Republic of Nigeria currently, you have continued to lead by example, showing the way to budding nationalists,” the governor said.

He prayed that the Almighty God would grant Senator Manager longer life, good health and strength to keep serving Him and humanity.