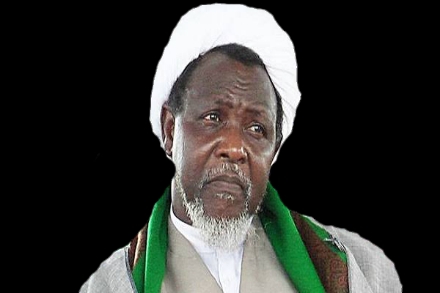 A group, the Academic Forum of the Islamic Movement has raised the alarm over the what it described as the deteriorating health of Sheikh Ibraheem El-Zakzaky and his wife, saying that El-Zakzaky is “being affected by progressive glaucoma, cervical spondylitis, and there are up to 55 bullet fragments with excessive lead and cadmium poisoning in his body.”

According to a statement signed by the spokesman of the group, Abdullahi Muhammad Musa, the duo “not only require their having access to qualified medical personnel right off, but also a medical facility with up-to-date equipment.”

If a government bends the laws to pursue an unjust cause, it will simply buttress its position on the rule of law as not having one iota of integrity and truth. Laws based on equal rights and the principles of justice are a recipe for peace and unity.

Otherwise, no nation outlives the dangerous and grievous after-effects of its milito-cratic leanings and the attendant brazen disrespect for the rule of law.

The regime whose many encroachments led to the extent that those at the power corridors could deploy numerous troops of soldiers, who take their main responsibility for the security of the citizenry and the whole nation, to the resident of an innocent, elderly personage, massacred more than a thousand of his followers; killed 6 of his 9 children and put the corpses, nay many in their last gasps, in mass grave[s]; shot him and his wife severally and continue to keep them in an unhealthy and dilapidated prison without any medication, is both a brutal and an oppressive one.

Nearly a year ago, on the 24th of October, 2020 to be exact, a visit to Sheikh El-Zakzaky by his one and only surviving son, Mohammed, unwrapped that although the Sheikh and his wife were alive, proper medical attention was all they needed in earnest.

Yet, if the condition has ever changed, it is for the worst. Right now, they could only do with a state-of-the-art medical facility.

Up to now they have been suffering from many injuries in their bodies and resultant multiple life-threatening health challenges.

Even so, the current health condition of Sheikh El-Zakzaky and his wife is causing considerable distress. It is also a constant source of worry to many a Nigerian citizen.

Therefore, it is worth public attention as it continues to deteriorate by the day.

In spite of all this, and in defiance of several court orders, Buhari continues to hold them without the required medical or surgical treatment.

For instance, on 24th February, 2020, Kaduna High Court affirmed them unfit for trial. So an order was immediately given by Justice Gideon KURADA, directing the officials of the central prison in Kaduna to grant them access to their doctors, but all to little or no avail.

Again, in a reckless disregard for laws, the Buhari regime has ignored the Federal High Court judgement delivered by Justice Gabriel Kolawole on the 2nd of December, 2016.

When rulers continue to unfairly present a caricature of the laws that won them the mandate they wield in a vicious manner, know that injustice is already rife and pervasive.

The health situation of Sheikh El-Zakzaky and his wife does not only require their having access to qualified medical personnel right off, but also a medical facility with up-to-date equipment.

This should be with immediacy of response to the emergency on hand.

Enough of the avoidable feet dragging and perilous delaying tactics. Isn’t it even obvious that the government is deliberately doing such things to just while away time toying with the Sheikh’s life?

Sheikh Ibraheem El-Zakzaky is being affected by progressive glaucoma, cervical spondylitis, and there are up to 55 bullet fragments with excessive lead and cadmium poisoning in his body.

There has been a serious case of sleep disorder, recurrent spiking hypertension and episodes of stroke.

Virtually a year ago, his cardiac ischaemia and ventricular hypertrophy were found to deteriorate to a severe degree, now requiring cardiac catherisation.

Of course, there is more to the Buhari regime’s wilful denial of proper medication to the couple than meets the eye; and such dilly-dallying is a matter of great concern.

It is another cause for alarm, because it is nothing but a move to complete what they started at the tail end of 2015.

Considering the developments, we are making it categorically clear that Buhari, along with his stooges, will be held responsible for whatever happens to Sheikh El-Zakzaky and his wife.

As we condemn their being detained, we will continue to protest, calling for their immediate and unconditional release.