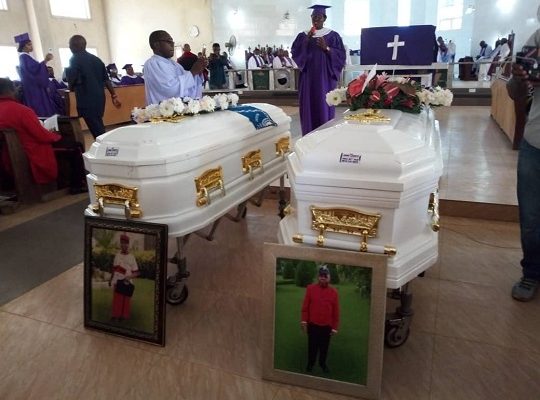 The Holy Trinity Anglican Church, Ohu Ahiazu, main Auditorium was filled to ful capacity. Amidst the high insecurity level in the South East, most especially Imo State, the celebration of life and times of the noteable Sons and Daughters of the Eastern Heartland otherwise known as Imo State, which started on Wednesday with a Christian wake – keep of the Nigerian foremost Rights’ Activist who was the Country and West African Director of Ford Foundation and also, Founder, Cleen Foundation, Comrade Innocent Chukwuma, has finally come to an end today with the interment of the departed Parents, Samuel Sunday and Agnes Chinyere, of a renowned Biography Writer and former Chief of Staff to the Ex- EFCC Chairman, Ibraham Lamorde, Comrade Jimmy Imo, at their hometown, Oru Ahiazu, Mbaise, Imo State.

Comrade Dr Jimmy Imo, who has aurthord beautiful Biographies for so many Prominent Nigerians home and diasopora including former President Goodluck Jonathan, is another great achiever that the Eastern Region can boast of anytime, anyday, an Astute in the Nigerian Civil Society Community, whose remarks opens any door in the Corridor of Power in Nigeria and International Community.

Our own Comrade Dr Jimmy Imo, who didn’t hide his feeling on receiving the delegation of the Civil Society Organisation and Pro – Democracy Movement led by its Secretary, Comrade AWA Bamiji and assisted by another noteceable Leader of the Group Comrade Solomon Sobade wears white clothing material today, is very quiet and cool in nature but his societal influence which always speaks volume louder than Jimmy Imo’s appearance is now noteceable with adequate publicity in Town for this joint Burial including the Construction of a massive Billboard at a major Ohu Ahiara Junction, Mbaise, Imo State, in remembrance of his Parents, which leads to his beautiful House.

The yesterday’s wake – keep paraded who is who in Nigeria including Political, Religious and Traditional Leaders from far and near and that of Mbaise among whom is Eze Francis Ogoke.

Jimmy Imo is a Night in his Saint Anne’s Church whose Daddy, died at 92, mobilised him and other Siblings to buy a Bus and donate to the Holy Trinity Church according to the One of the glowing Tributes during the yesterday’s wake keep while the Wife, Agnes Chinyere, who passed on in March at age of 83 was an Amazon in both Church and the Community. This hardworking Daddy, Samuel Sunday gave up the ghost last month while suffering from depression as a result of the unexpected death of his caring Wife.

Like Loading...
Previous PostSouth-East APC Presidency, A Sure Project Comes 2023 for Sake of Nigeria, Africa Next PostJimmy Imo in Big Celebration of Life and Times of his Wonderful and Caring Parents