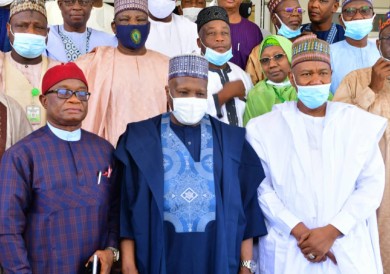 Contents show
1 …Says Gombe will Continue to Work with FUK to Provide Quality Education to the People
2 …Warns Agents of Doom to Desist from Fanning Embers of Disunity
2.1 Kindly Share This Story With Friends via:
2.2 Like this:

…Warns Agents of Doom to Desist from Fanning Embers of Disunity

Gombe State Governor, Muhammadu Inuwa Yahaya says his administration will continue to work in partnership with the Federal University of Kashere, FUK in a manner that the varsity can keep providing quality education to the people of the State.

Governor Inuwa Yahaya stated this when he granted audience to the joint delegation of FUK management and the Presidential Visitation Panel to the university led by the Vice Chancellor, Professor Umar Pate at the Council Chamber of the Government House.

The Governor assured that Gombe State Government under his leadership will continue to support the University based on the fact that the institution does not only provide tertiary education to the people of the State but also employment to its citizens.

He said the presence of the Federal University of Kashere in Gombe has helped greatly in reducing the risk attached to distant travels in search of tertiary education and has ultimately provided less financial obligations on parents who will rather patronize the institution than send their children very far to acquire university education.

On some of the challenges confronting FUK, Governor Muhammadu Inuwa Yahaya assured the management of the institution that his administration will do everything necessary to ensure that the varsity is allocated additional land for expansion.

On request by the University to have a link with the Leventis Foundation in Tumu for its sugar research programme, Governor Inuwa Yahaya said the initiative was in line with his administration’s Agricultural Entrepreneurship Training Centre, saying his administration will look at the best way possible to collaborate for optimal results.

He said despite the paucity of funds being experienced by the State, in the midst of multitude of demands, his administration will remain resolute towards supporting FUK, as according to the Governor what goes into the Federal University of Kashere will eventually trickle down to the people of the State.

According to Abuja Business Reports, Governor Inuwa Yahaya used the forum to advise secessionists and agents of doom to desist from fanning embers of disunity in the country, describing the unity, peace and progress of Nigeria as non-negotiable.

Earlier speaking, the Vice Chancellor, Federal University of Kashere (FUK), Professor Umaru Pate said they were at the Government House to officially introduce the new management of the University and to intimate the Governor on the vision of the new team going forward.

This vision as explained by Professor Pate is to develop the University and to consolidate on past achievements in the institution, saying anything less will not be accepted by his leadership.

Professor Pate said as a young institution, the Federal University of Kashere is desirous of development where its certificate can be respected, research work noted and its scholars acknowledged any where in the world.

In his remarks, the Chairman, Presidential Visitation Panel to the Federal University of Kashere, Dr. Mac John Nwobiala said the 6- man panel will appraise the performance of the institution in terms of leadership qualities of the Vice Chancellor, principal officers and governing councils with a view to ascertaining the extent to which they have fulfilled their mandate for public good during the period under review spanning ten years.