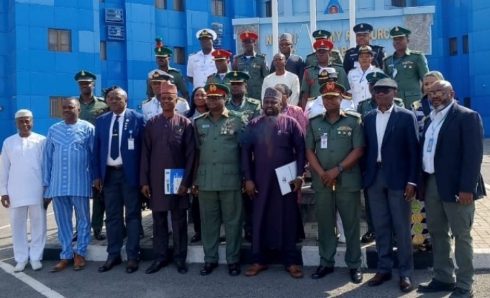 Minister Hails Military’s Fight Against Piracy in Gulf of Guinea

Agba, who was represented by his Special Assistant, Mr Rajab Abdulrahaman, gave the commendation at the inauguration of the Anti-piracy Course 4/23 organised by MLAILPKC, on Monday in Abuja.

The course was organised by the Martin Luther Agwai International Leadership and Peacekeeping Centre (MLAILPKC) in collaboration with the United Nations Development Project (UNDP) with support from the Government of Japan.

He said the centre had been recognised for providing a world class e-learning platform, focused mainly on courses related to peace support, humanitarian relief, and security operations.

Agba said that the MLAILPKC had remained a reliable training centre for leadership and peacekeeping operation in Nigeria considering the prevalence of insecurity, humanitarian crisis and displaced communities.

The minister commended the support of international organisations for their commitment to sustaining the centre.

The Director-General, Nigerian Army Resource Center (NARC), retired Maj.-Gen. Garba Wahab, urged the participants of the course to open their minds to acquiring the requisite knowledge needed to deal with piracy in the GoG.

Wahab said that maritime environment had been one of the mainstay of the nation’s economy, adding that no nation could develop without security.

He said if the maritime environment was not secured economically, Nigeria will be in crisis and so, we must find a way of ensuring that the Gulf of Guinea is secured.

“Whether we like it or not for so many reasons, we must ensure that the sea is secured and everybody must come around to assist those who are responsible, particularly Nigerian Navy,“ he said.

“It is the responsibility of every Nigerian. Nobody will come from outside, they can assist us in funding but the onus of performance is on Nigeria and other member states to ensure that the Gulf of Guinea is secured,” he said.

The UNDP Team Lead, Governance, Peace and Security, Mr Matthew Alao, in his remarks said that the activities of pirates in Gulf of Guinea (GoG) had persistently been in the downward trends in the past

Alao said the International Maritime Bureau (IMB) of the International Chambers of Commerce (ICC) 2022 annual report indicated that 115 incidents of piracy and armed robbery against ships and seafarers were recorded globally in 2022 compared to 132 recorded in 2021.

He said the report stated that the GoG continued to experience desirable reduction in maritime crimes in 2022 as the region accounted for 19 incidents as against 35 incidents recorded in 2021.

The feat, according to him, was achieved through unrelenting efforts, partnerships and investments against piracy by the Member States particularly Nigeria. (NAN)