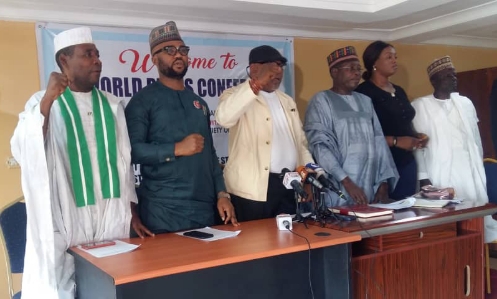 CNPP, CSOs Want FG To Investigate DSS Over Allegation Of Plots To Link Emefiele To Terrorism

Contents show
1 The rest of the text of the briefing reads:
1.1 Kindly Share This Story With Friends via:
1.2 Like this:

The Conference Of Nigeria Political Parties (CNPP) in conjuction with civil society organisations under the umbrella of the Coalition Of National Civil Society Organisations (CNCSOS) has tasked the Federal Government of on thorough investigation of allegation of plots to frame the Governor of the Central Bank of Nigeria (CBN), Mr. Godwin Emefiele and implicate him as terrorism financier by the State Security Service (SSS) otherwise known as the Department of State Services (DSS).

The groups said a thorough investigation of the the matter will reassure the international community that the rule of law prevails in the country.

Briefing newsmen at a world press conference in Abuja, the Secretary General of the CNPP, Chief Willy Ezugwu who read the address jointly signed by himself and the National Secretary of the CNCSOs, Alhaji Ali Abacha, urged “President Buhari and the Attorney-General of the Federation, Abubakar Malami (SAN), to immediately put in motion the processes of suspending and thoroughly investigating the circumstances surrounding this national and international embarrassment.”

Human rights lawyers and civil rights groups under the aegis of the Coalition of National Interest Defenders had raised the alarm that the Nigerian secret police, the DSS, was plotting to frame the CBN Governor, saying that they have a concrete evidence to support their claims against the State Security Services.

According to the CNPP and the civil society coalition, “the country was jolted when a group of human rights lawyers and some civil society organisations raised the alarm that there was a plot to frame the Governor of the Central Bank of Nigeria, Mr. Godwin Emefiele in terrorism financing allegation.

“The gravity of what Nigeria was confronted with came to the front burner when members of the group revealed that the Department of State Services (DSS) had even gone to the extent of approaching the court to obtain a warrant to arrest Godwin Emefiele without the consent or knowledge of the Commander-in-Chief of the armed forces of the Federal Republic of Nigeria, President Muhammadu Buhari”, they said.

The rest of the text of the briefing reads:

The Coalition of National Interest Defenders, which brought the development to the open, went ahead to allege that the plot was to keep Mr. Emefiele for at least 60 days until after the general elections next year. This should ring a bell when we recall that this alleged plot is coming immediately after the redesign of the naira notes and the review of the cash withdrawal limits for both individuals and organisations.

We have all hailed the cashless policy of the Central Bank of Nigeria such that even the corrupt politicians who are opposing the cash withdrawal limits acknowledge that it is the way to go but that the timing was wrong. They also sort to get wavers for election spending. Why are they looking for wavers? They want to use our stolen commonwealth to buy our votes. 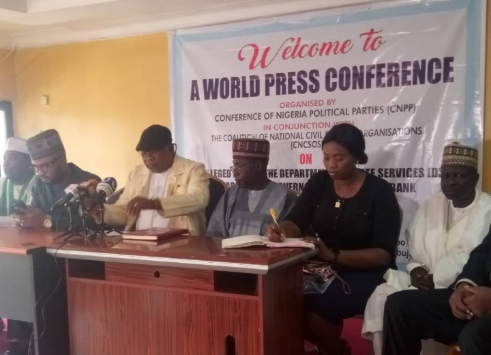 In view of the current revelation, we are afraid that the State Security Service is derailing from its statutory role to becoming a tool in the hands of desperate politicians. This is dangerous for the country and must be discouraged at any cost.

Those who wants to receive and spend money without any traces are those who have been kicking against the cashless policy of the CBN.

If you have legitimate money, why are you afraid to wire the money through bank transfers? Why are you afraid of cash withdrawal limits? There is no limit to the amount you can transfer through the bank but because they are having our stolen money, they don’t want to make traceable transactions and that is the sin of Godwin Emefiele.

That’s why they want him out of the way before the election so that someone who can do their biddings is appointed to reverse the cashless policy implementation.

We must note that President Muhammadu Buhari has shown maximum support for the economic stability and reform efforts of the CBN Governor and that was probably why they wanted to remove him from office without the consent of Mr. President.

At this juncture, we hail the Nigerian judiciary for refusing to be used for the planned hatchet job. It is unfortunate but it happened.

According to reports, the affidavit filed by the State Security Service in support of its application claimed that preliminary investigation had revealed various acts of terrorism financing and fraudulent activities perpetrated by Godwin Emefiele and his involvement in economic crimes of national security dimension but there was no evidence.

Hence, the court rejected to issue order for the arrest of the CBN Governor. Even, the identity of the said Godwin Emefiele, as the sole respondent, was not clearly stated in the affidavit according to the court, which made the plot more of a shoddy deal.

And, in view of a reasonable suspicion that some politicians may have influenced the State Security Service in the planned arrest of Godwin Emefiele, we join well-meaning Nigerians and groups to the call on President Buhari and the Attorney-General of the Federation, Abubakar Malami (SAN), to immediately put in motion the processes of suspending and thoroughly investigating the circumstances surrounding this national and international embarrassment.

The attempt to obtain a backyard order to remove a high ranking officer of the Federal Republic of Nigeria for obvious political reasons should be of serious concern to all Nigerians as we don’t know who will be the next.

By virtue of Section 150(1) and Section 174 (1) of the 1999 Constitution of the Federal Republic of Nigeria as amended, the Attorney-General of the Federation has the powers to institute and undertake criminal proceedings against any person before any court of law in Nigeria.

Therefore, nothing stops the Attorney-General of the Federation from exercising his powers in this matter to send a clear signal to the international community that Nigeria is not a banana republic, where anything goes. If public office holders who err are not appropriately sanctioned, it will send a wrong signal to foreign investors and project Nigeria as a country without rule of law.

This is paramount as Section 174 (3) expressly stated that “In exercising his powers under this section, the Attorney-General of the Federation shall have regard to the public interest, the interest of justice and the need to prevent abuse of legal process.”

What is primarily at stake here is public interest.

We hereby urge President Muhammadu Buhari and the CBN Governor never to relent in their efforts to place Nigeria among the best 20 economies in the world in line with the cashless policy of the Central Bank of Nigeria.

We assure Mr. Godwin Emefiele that Nigerians on the streets, who are in pains of starvation and hunger due to the continued looting of public funds meant for their well-being by some politicians, are standing with him and will vehemently resist any attempt to derail the cashless policy of the Federal Government of Nigeria.

We also commend the Federal Government on the exemplary leadership with the ban on cash withdrawals from public accounts. The stoppage of cash withdrawal from all public accounts is another legacy in the war against corruption and electoral fraud by the President Muhammadu Buhari administration.

The ban on cash withdrawals and subsequent directive to public officers to immediately open domiciliary accounts in foreign and local currencies ahead of the commencement of the cash withdrawal policy will deepen the gains of the cashless policy of the federal government through the CBN.
Thank you and God bless you for coming.