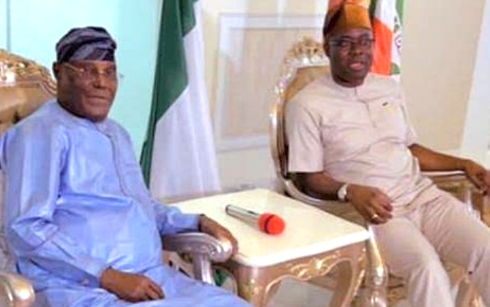 Governor Seyi Makinde of Oyo State and Peoples Democratic Party (PDP) in the South West have joined the call for the National Chairman of the party, Senator Iyorchia Ayu, to step down for a southerner, to ensure inclusivity in the party.

The thinking of the South West PDP was disclosed at a stakeholders meeting with the presidential candidate of the party, Alhaji Atiku Abubakar in Oyo State on Wednesday.

Governor Makinde maintained that accepting inclusivity within the Peoples Democratic Party (PDP) is a paramount factor to be considered if the party seeks to rescue Nigeria come 2023.

On his part, Makinde demanded Ayu’s resignation, saying that Ayu must step down so that southerners will feel “fully included” in the party’s leadership.

Governor Nyesom Wike of Rivers State had also demanded that Ayu step down for a southerner.

Ayu was slated to commence a two-week trip overseas and had recently appealed to the acting Chairman of the party’s Board of Trustees (BoT), Adolphus Wabara, to help resolve the crisis in the party by reaching out to aggrieved members of the party.

Wabara emerged in a bid to resolve the lingering problems in the party after the PDP BoT Chair, Jibrin Walid resigned amid agitation by some southern caucus leaders of the party for the resignation of Ayu as chairman of the party.

Wike, who came second with 237 votes as the closest rival to Atiku who won the party’s presidential ticket by 371 votes.

Wike insisted that Ayu from the North should step down for a southerner, arguing that northerners hold all the key decision making positions in the party ahead of the 2023 general elections.

The eight years of the All Progressives Congress have left Nigeria sharply divided and as such, the issue is PDP must practice what it preaches.

In the words of Makinde, “If we want to unify Nigeria, we must unify the PDP first.

“If we want to restructure Nigeria, we must have the willingness to bring inclusivity to the PDP. Do we have the capacity? The answer is resounding yes.

“The message from the South-West PDP is the South-West is asking that the National Working Committee of the PDP should be restructured,” he buttressed.

Having established the premise for inclusivity, the governor called for the resignation of the National Chairman of the PDP, Senator Iyorchia Ayu, for the people of the South to feel a sense of belonging in the party.

Makinde and his Rivers State counterpart, Governor Nyesom Wike, have been calling for the resignation of the PDP National Chairman in a bid to see that all key positions in the party are not held by individuals from the North.

“The truth is that we do not have any issue either with our party or our candidate. If there are challenges they must be tabled.

“We are supposed to give hope to our people, we want them to listen to us. Our party wants to rescue Nigeria and our candidate is a unifier. He wants to restructure Nigeria.

“We are asking the National Chairman to step down so that the South will be fully included. That is the message,” Makinde maintained.