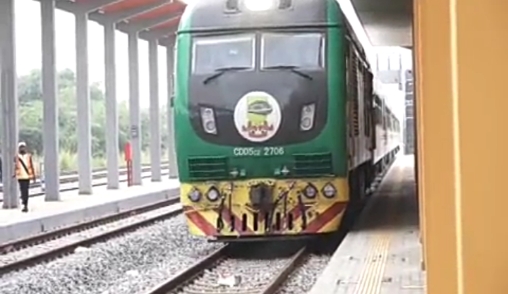 100 Days After Abuja – Kaduna Train Attack 5 Children, 45 Others May Be Killed

Following threats by their abductors to start killing no fewer than five children and 45 other people still held by bandits after the insurgents attacked a passenger train, North West of Kaduna State, near Nigeria’s capital, their families have continued to lament, as they held a protest demanding more action from the government to free the hostages.

The Associated Press (AP) reports that as the families protested the 100 days their relatives have been held captive after the attack, the Nigeria police dismissed allegations that “not enough” is being done to rescue the victims who are among the thousands either abducted or killed in the last year as the country faces continued armed violence.

Gunmen in late March attacked the train with explosives and gunfire, killing seven people and abducting dozens of others.

Although no arrest has been made in connection with the attack, police said that they are “still gathering intelligence from locals” to find and rescue the hostages, Kaduna police spokesperson Mohammed Jalige told AP on Wednesday.

No group has claimed responsibility for the attack, which authorities blamed on armed groups who have frequently targeted remote communities in North West of Nigeria with the aid of Islamic extremist rebels.

More than 100 passengers from the train were missing initially, but some were later freed by the kidnappers in conditions not made public.

In June, the Nigerian presidency said the Abuja train attackers “made a demand for the release of their own children.”

As the families of the hostages protested in Kaduna, asking authorities to “work faster and do more,” AbdulFatai Jimoh, chairman of the families’ union, said they only have one key demand: “We want them (the government) to work faster on this because the longer our people stay in the bush, the more they are exposed to a lot of danger.

“We want them to hasten the process of negotiation with the abductors of our family members so they can come out in the shortest time possible,” Jimoh told the AP.

He said the families are also worried about the health of the hostages believed to be kept in vast forest areas that often serve as hideouts for the armed groups, many of whom authorities have identified as formerly herdsmen caught up in Nigeria’s pastoral conflict over access to water and land.

One of the abducted passengers was shot by the kidnappers, he said, while some others are reported to have fallen sick.

Abdulaziz Atta, whose 85-year-old mother and sister are among the captives, said he cannot stop thinking about them.

“Just imagine what they have been going through in the bush and you have heavy rains everywhere,” he said.

“Imagine an old woman there; at that age, you need medication, you need care, still wearing the same clothes, think about the bush, it is in the bush so they are exposed to reptiles,” he added.

“I don’t want to remember the birthday; it just makes me sad,” Abdulaziz Atta said.

It is yet to be known if federal and state governments’ actions are enough to free the hostages before the bandits kill some or all the abducted passengers in the Kaduna-bound train.

Like Loading...
Previous PostDubai Tourism To Give 12 Africans A Chance To Visit Dubai With The “Dubai Girls” Next PostNo CCTV Cameras in Kuje Prison, Lawan Laments